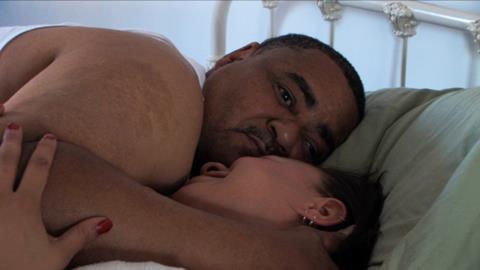 Lord Byron is the tale of an unlikely Don Juan who has an even more unlikely spiritual awakening in the swamps, and Zack Godshall’s Bayou Byron had the distinction of being made for the lowest budget of any feature at Sundance this year.

That rock-bottom budget, less than $1000, will get Lord Byron attention from fellow filmmakers, which will send it to festivals where panels of peers will surely discuss how Godshall kept his costs so low. Film schools wherever the term “Mumblecore” is known will take up the same conversation, though the film’s exposure probably won’t go much farther.

Godshall’s story, written with Ross Brupbacher, begins as a self-portrait narrated by chubby lazy Byron (played by Paul Batiste, a Louisiana barber in his professional life), who tells us that he loves women. And women seem to love this gentle soul.

Byron, a large Black man who lives with his white ex-wife and her family, is drawn to a television evangelist in a military uniform who predicts a hellish future. Troubled, the pot-smoking lay-about decides to become a monk. He’s waylaid, however, by a violent encounter with a woman he picks up and is sheltered by men who live in a forest commune.

The string of incidents (and there are plenty more) is the film’s plot, all narrated in Byron’s soft voice.  The action, if it can be called that, is punctuated by rousing orchestral excerpts from the overture to Mozart’s opera, Don Giovanni.

As Byron, the somnolent Paul Batiste is an appealing bear of man, more Buddha than Falstaff as he stumbles toward an unknown spiritual destination. The jumble of characters whom he meets can be quirky fun, although their studied oddness wears thin, and emotional crescendos that fire up from time to time have all the drama of community theater improvs.

In this film made on the hyper-cheap,  cinematography by Godshall is better than competent, especially when the camera is observing the lush Louisiana surroundings. Shaky and blurry “special effects” that seem intended to dramatize Byron’s religious tremblings and his injuries from a beating are crude reminders by Godshall’s austerity.

Lord Byron is best seen as an experiment in telling the simplest of stories with the simplest of means. Now that the film has shown at Sundance, the spiritual destination for American no-budget indies, Zack Godshall will have plenty of imitators.