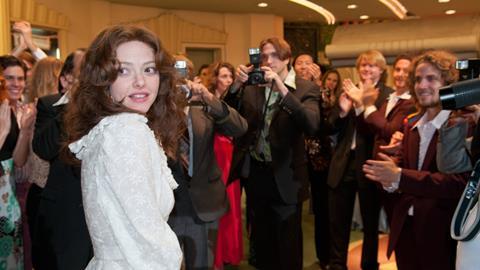 With Howl, Epstein and Friedman incorporated animated sequences and actual transcripts from Ginsberg’s obscenity trial to offer an impressionistic likeness of the writer. By comparison, Lovelace is more traditional in its approach, although, in a rather clever maneuverer, the filmmakers eventually offer a contradictory version of some of the events we’ve seen, an acknowledgement that Linda later wrote a memoir in which she set the record straight about her brief porn career and her relationship with Traynor. By doing so, Lovelace argues that the first (happier) sequence of events is merely a fantasy — and that the second version, while darker and far less satisfying, depicts the private hell Linda went through out of the public eye.

Despite this thought-provoking structural trick, though, Lovelace for the most part is more informational than illuminating, showing Linda’s family background, her rise to fame, and then her rejection of her own stardom. It does seem like a bit of a missed opportunity that Lovelace quickly wraps up her later years, not looking more deeply into her post-Lovelace life when she left Traynor and started a family with a new husband. No doubt this transition could not have been easy for her when the world still knew her as the actress in Deep Throat, so it’s a shame that the filmmakers only spend a few minutes on a major portion of her life.

Still, Seyfried delights as this young, bubbly woman who slowly finds the attention she craves as a porn star. (And, in the other version of events, Seyfried is convincingly tormented due to Traynor’s physical and verbal abuse, which led Linda into pornography.) Sarsgaard is stellar as both the confident, smooth-talking Traynor of the couple’s early years and then the frightening monster later on. Also quite impressive is Sharon Stone as Linda’s controlling mother Dorothy, a woman who bullies and antagonises her daughter in a way that Traynor will later duplicate. Unglamorous and pitiless, Stone’s performance is shocking in its ugliness, which helps to explain why Linda would run off with a man as questionable as Traynor in the first place.

Screenplay: Andy Bellin, inspired by the life story of Linda Marchiano and Catherine A. MacKinnon