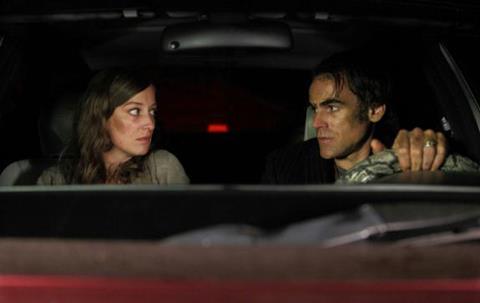 A film that may leave new parents sweating with fear and mulling over a few home truths about how they regard the new addition to their family and their relationship with other, Lullaby Ride (Nachtlarm) offers up a few smart moments of angst and anger, though as a slick genre movie – presumably its intention – it never really moves out of second gear.

The film cries out for more action, chills and sensuality…these things are hinted at, but never really delivered.

The concept is a sound one – bickering new parents on a quest to find their stolen car that happens to have their baby in the back – but the film never quite has the strength of its convictions to rack up the violence, terror or sexuality its B-movie structure is crying out for.

Oddly the film, which had its world premiere at the Locarno Film Festival, may well be ripe for a Hollywood re-make makeover…though first to be addressed would be the rather unbelievable plot device that sees them losing their car and acquiring a new one.

Livia (the ever-impressive Alexandra Maria Lara) and Marco (Sebastian Blomberg) tiptoe around their apartment at night as they hope-and-pray that their nine-month old son Tim (Tiziano Matti) will stay asleep.

When he wakes screaming they head off for their regular ritual of driving around the city at night, with the motion of the car seemingly the only thing that will keep him asleep. The drive, with both parents exhausted and emotional, also leads to deeper debate about how happy they are and their feelings towards their child and their relationship.

They stop at a service station for Livia to head to the bathroom, and with Tim fast asleep Marco makes the great mistake – and to be honest one that plot-wise is also hard to believe – of popping into the shop to buy a packet of cigarettes, leaving the car idling with Tim in the backseat. Both emerge from the building to find the car stolen, and in a moment of desperation they take a red Mercedes left with keys in the ignition by a man who has rushed to the toilets with irritable bowel syndrome.

Their modest silver Golf has been taken by joyriders Jorge (Georg Friedrich) and Claire (Carol Schuler), who are naturally bemused and rather annoyed to find a baby in the backseat. Add to the mix the fact that the Mercedes’ owner happens to be a gangster-type who wants his car back rather urgently – especially given there is a gun in boot and thousands of Euros hidden beneath the floor – and you have a classic Euro car-chase movie.

There are some nice moments – bad-boy Jorge happens to be a dab-hand at nappy changing; Tim’s wails interrupt Jorge and Claire as they try and have front-seat sex in a similar way he interrupts Livia and Marco at home; punkette Claire names the baby ‘Golfi’ after the car, and mild-mannered Livia gradually reveals a stronger side – but the film cries out for more action, chills and sensuality…these things are hinted at, but never really delivered.

Oddly where it strikes a more profound chord is the moments of heightened discussion about what it is like to be a new parent; the impact on a couples’ relationship and what it means to truly love a child you have brought into the world together. But these moments – impressively shot in the cars at nighttime – don’t always fit easily with the action-drama aspect of chasing down a stolen child.