Madagascar 3 swings into top spot at the UK box office 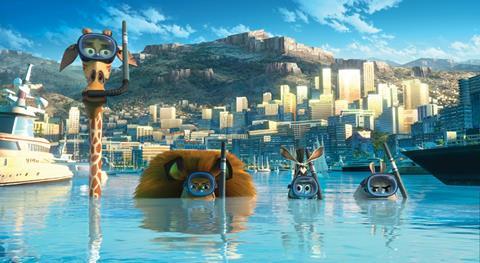 Bolstered by $3.8m (£2.4m) in previews, Madagascar 3: Europe’s Most Wanted has debuted top of the UK box office, preventing Taken 2 from recorded a third straight week at number one.

Remarkably consistent, both previous entries went on to take over £20m in the UK with Escape 2 Africa edging ahead with $37.5m (£23.4m) compared to Madgascar’s $36.3m (£22.7m). Given the lack of direct family competition set to open (although Skyfall does arrive this week) and the upcoming school half-term, expect Madagascar 3: Europe’s Most Wanted to at least challenge both of those totals.

Thanks to a Wednesday opening, Paramount was able to record a one-two combo at the UK box office as Paranormal Activity 4 scared up $4.1m (£2.5m) on debut to chart second.

The fourth instalment in the ever-popular franchise (each previous entry has taken around £10m-£11m overall) did show some signs of slowing down though as its opening was down on the previous three which had all managed debuts over £3m. Paranormal Activity 2 remains the series’ benchmark as it took $6.0m (£3.8m) on its way to $17.7m (£11.0m) overall.

Rounding off this week’s top five was Disney’s Frankenweenie which recorded a somewhat soft debut of $1.2m (£740,000) from its 411 sites.

That result is lower than director Tim Burton’s previous stop motion feature Corpse Bride which spooked up $1.8m (£1.2m) and is among of the lowest debuts ever for a Burton film in the UK, ahead of only Edward Scissorhands, Beetlejuice, Big Fish and Ed Wood, all of which opened on significantly less sites.

Arguably the week’s most impressive performance belonged to StudioCanal’s Beasts Of The Southern Wild which notched a $290,000 (£181,801) debut, including previews, from just 28 sites for a mighty $10,357 (£6,493) site average, the week’s second highest behind Madagascar 3. Benh Zeitlin’s debut feature, which won Best Debut Feature at LFF on Saturday (Oct 20), expands wider this week.