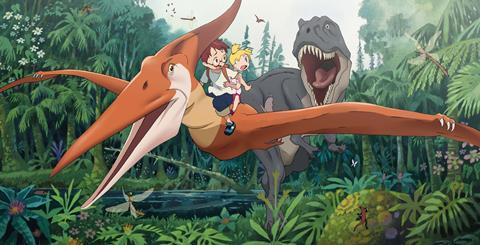 Magic Tree House (Majikku tsurî hausu) is a joyfully broad bit of anime, and while lacking the layered animation detail of a Studio Ghibli film it is still a fun-packed adventure aimed very much at the young ones. Perhaps too unsophisticated to work as a theatrical offering outside Japan, it could appeal to DVD distributors – and possibly broadcasters – in territories where the award-winning original books are popular.

The story moves at an engagingly fast pace and is packed with well-meaning messages.

The original US books are illustrated by Sal Murdocca, but the Japanese versions are handled by Ayana Amako and it is this style that forms the basis for the film adaptation. Some 92 million copies of the books have been published in 33 countries, with 3.3 million sold in Japan alone. The film version had its world premiere at the Tokyo International Film Festival, and opens in Japan on January 7, 2012.

The books tell the stories of brother and sister Jack and Annie, who live in Frog Creek, Pennsylvania, and who embark on a series fantastical adventures from a magical tree house they discover in a nearby woods. They have to solve a series of riddles and recover mystical medallions to help free sorceress Morgan le Fay. The first series of 28 books – on which the film is based – involve Morgan, while subsequent books – subtitled the Merlin Missions – take place in fantasy realms.

The Japanese illustrations show the children as a bit younger than the US version, and in the film Jack (voiced by Keiko Kitagawa) is a somewhat timid book with a love of books, constantly egged on by his brave and adventurous younger sister Annie (Mana Ashida). For some reason sorceress Morgan le Fay (Miki Maya) has been turned into a mouse (a mouse sporting the same hairstyle as Morgan), and through the Magic Tree House she recruits Jack and Annie to help her become normal.

While reading a certain book, when the children say ‘I wish I was there’ they find themselves transported into the world the book describes, and once there have a series of adventures as they try and track down a magical medallion that will help free Morgan.

They find themselves in the late Cretaceous period in the land of dinosaurs and threatened by a T-Rex; transported to England during the Middle Ages where they have to explore a castle; sent to Pompeii on the eve of the eruption of Mount Vesuvius and finally up against pirates of the Caribbean. Finally gathering the medallions they manage to free Morgan, and also meet Merlin (or ‘Marlin’ as the subtitles amusingly wrongly translated), who had trapped Morgan with a spell in order to teach her a lesson

The film adapts four of Mary Hope Osborne’s books (Dinosaurs Before Dark, the first in the series; The Knight At Dawn, number two; Pirates Past Noon, number four, and Vacation Under The Volcano, number 13), and while the animation may be simplistic (especially the character work) the story moves at an engagingly fast pace and is packed with well-meaning messages about supporting your friends, reading books and family loyalty.

Screenplay: Ichiro Okouchi, based on the books by Mary Hope Osborne and original illustrations by Ayana Amako