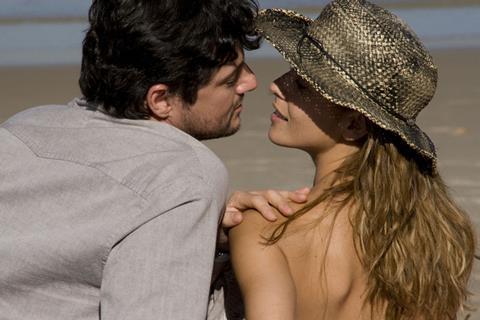 Malu On A Bicycle might offer no real surprises in its tale of romance, love and jealousy, but it is delightfully performed (especially by Fernanda De Freitas as Malu) and set against impressive Rio de Janeiro and Sao Paulo locations. It has a certain charm and could interest distribs and certainly deserves to feature in film festivals.

It is breezily watchable and delightfully romantic.

Screening in competition at the Rio Film Festival the film, the film is a breezy romantic drama that is enjoyably fresh and certainly very watchable.

The film opens in Sao Paolo where serial womanizer Luiz Mario (Mercallo Serrado) opens a new nightclub called Espacofabrica, but after success and more than a few inconsequential affairs he starts hearing voices and needs to take break.

He heads off to Rio de Janeiro, and after wandering down the Copacabana beach he accidentally bumps into Malu, who is cycling along the beach.

They start a passionate love affair and try to make their romance work, with Malu regularly travelling to Sao Paulo to be with Luiz. But she is a free-spirited Carioca and he is a Paulista, and despite their best intentions their relationship falters and a misunderstanding about a love letter causes even more trouble.

Marcello Serrado is suitably charming and confused as Luiz, though the real revelation is the fresh and sexy Fernanda De Freitas who dominates the film with an innate charm and fresh style. As a traditional romantic drama Malu On A Bicycle may well offer no real surprises, but it is breezily watchable and delightfully romantic.