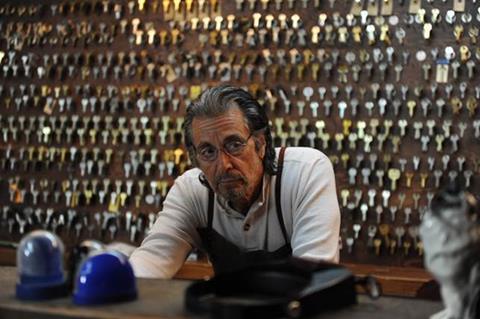 Manglehorn shows director David Gordon Greene’s ability to tell a familiar story in an impressively off-kilter manner, charting the story of reclusive elderly Texan locksmith and his tenuous relationships with the few people he allows close to him. Though well performed and engaging at times, Manglehorn (a great title…promising much, but in the end just a name) ultimately rather flatters to deceive, following an entirely predictable route when somehow hinting at moments of drama and intrigue that never emerge.

It is a relatively reigned-in performance from Pacino – both in terms of his line delivery and physical mannerisms – but he makes the most of his lengthy monologues (often internal ones) as he does his best to flesh out a bitter man who feels life has robbed him of happiness.

The film certainly succeeds in its sense of understated unsentimentality, frustrated romanticism and gently left-field moments of humour, but after the director’s recent films - such as Joe (screened at Venice last year) and Prince Avalanche – and the high profile casting of Al Pacino expectations will be high for this rather quirky story of loneliness and longing.

It is a relatively reigned-in performance from Pacino – both in terms of his line delivery and physical mannerisms – but he makes the most of his lengthy monologues (often internal ones) as he does his best to flesh out a bitter man who feels life has robbed him of happiness. Less flashy than The Humbling, which also premiered at Venice, it is a role that allows him some shambling fun though it does feel a little over-written at times.

Locksmith A.J. Manglehorn (Pacino) leads a solitary life, busy with work before pottering home to feed his much-loved cat. There he drinks, eats bad food and writes letters to Clara, the long-lost love of his life. He has a fractured relationship with his wealthy son (Chris Messina), though tenderly plays with his granddaughter every week, and the only other person he appears fond of is bank teller Dawn (Holly Hunter), who he chats to every Friday when he pays in money from his business.

He and Dawn set up a tentative date (at the local Legion where they tuck into pancakes) and he subsequently asks her out for dinner. It is a beautifully excruciating scene as she expresses her open warmth to him while he simply talks about how wonderful Clara was and how much he clings to her memories. Holly Hunter is quite superb as a warm and loving woman knocked back by Manglehorn’s sheer thoughtlessness and single-minded obsession.

But Manglehorn must change and grow – though the film offers no real explanation for his realisation.  His son turns up asking for some sort of help and support, plus he has an uncomfortable encounter with Gary (an impressive Harmony Korine) who he once coached at baseball and who has an odd soft spot for Manglehorn, and who invites him to a bar and the massage parlour he now owns. But these moments only register as minor dramatic incidents and barely convince as dramatic drivers for the story.

It is to David Gordon Green’s credit that he manages to keep Manglehorn intriguing, even if the film never completely delivers. Apparently he had the title in mind for a while and asked the film’s writer Paul Logan to come up with a story to with it. There are moments of charm – Pacino searching for his cat; scenes of him playing with his granddaughter; an earthquake shaking his shop, or scenes of him avoiding dealing with a bee-hive growing from the base of his letterbox – but somehow these never quite amount to a film to really relish.

Pacino (dealing with a cat at a vet, just as he did in The Humbling) is nicely low-key, though the film offers him little in the way of charm or charisma. Perhaps best of all is Holly Hunter’s delightfully warm performance as a woman willing to take a risk on love and who is treated thoughtlessly. She is the real compassionate heart of the film and is (unsurprisingly) only at the end of the film that Manglehorn comes to see that the possibility of happiness might lie in her direction.