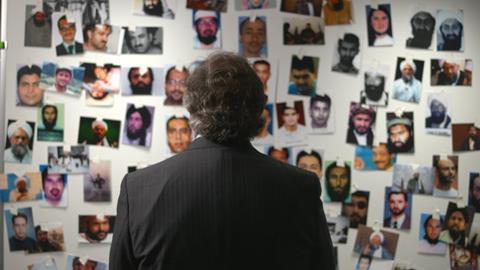 Manhunt – or to give it its full title, Manhunt: The Search For Osama Bin Laden - dissects the CIA’s long pursuit of the al Qaeda leader. As intelligence analysts blamed for 9/11 save their own reputations, the doc revisits the global dragnet with the people who conducted it.  Told largely by CIA women, Manhunt could find a sizable female audience on HBO when it marks the mission’s anniversary in the spring.

Manhunt breaks new ground in the circles of American independent film as a tale that ends, as it did unexpectedly at Sundance, with audiences giving standing ovations to CIA employees.

It could also be seen as an improbable ode to feminism, another asset. Yet war-glut risks suppressing that viewership, as it has with any films dealing with recent conflicts in the Islamic world. Shelf life, given the changing Middle East situation, will be brief.

Manhunt predictably redeems the much-maligned CIA analysts who were stigmatized for lacking exact intelligence about the 9/11 attacks. Several analysts who tracked Bin Laden since the 1990’s then advance the doc’s story to the discovery of the fugitive’s hiding place in Abbottobad, Pakistan, as a trail of prisoners and informants lead the CIA to the sheik. The CIA researchers themselves suffered casualties. At a pivotal moment, a trusted Jordanian physician, whom agents thought they had turned, blows up himself and part of the CIA team – the scene is also reconstructed in Zero Dark Thirty. Don’t expect a victory lap. The doc skips details about the siege and capture of Bin Laden’s safe house.

Greg Barker, who based his film on a book by veteran reporter Peter Bergen, packs his information densely, making Manhunt a reality check of the reality check that Zero One Thirty promised to be. Tracking suspects is painstaking and slow, we’re told, and needs patient personalities that don’t crack after missing a quick crescendo. Mostly women stalked Bin Laden, from desks in Washington.

Barker took a measured look at a horrific tragedy in Sergio (2011), which examined the peacemaking achievements of the Brazilian UN diplomat Sergio Vieira de Melo, who died in a bombing in Baghdad in 2003.

Barker’s strategy in revisiting the search for Bin Laden counterposes the story told by those understated women with shoot-from-the-hip war stories from Marty Martin, a former operative in the field who speaks Arabic with a Louisiana accent. With lesser voices, Manhunt might have lagged, but personalities and skillful intercutting of archival images fuel its momentum.

Details also keep the audience watching. CIA agents insisted on circulating the photos of the disheveled and demoralised captive Khalid Sheik Muhammad, to show other prisoners their own potential fate. Jose Rodriguez, a former counter-terrorist official, gives a primer on interrogation, which any student of torture won’t want to miss.  One analyst assesses the role of emotional outbursts in the office – “men throw chairs, women cry – which is worse?”

Beyond interviews and archives, Barker’s graphics team came up with a novel storytelling technique. A transparent wall became a billboard on which the camera zooms in and out. Official documents become illustrations or visual footnotes. The wall also diagrams global al Qaeda connections in all directions. An empty space in the wall is filled by the face of an analyst, the person whose job, in CIA office-speak, was to “connect the dots.”  The contrast with James Bond is clear.

The audience sees where blame might be placed when the wall is papered with warnings from analysts that were ignored by politicians or higher-ups before 9/11.

Yet Manhunt’s shortcoming is that it fails to identify those responsible for deficiencies that let 9/11 happen – negligent and distracted politicians, according to the women analysts. The US government did not cooperate with the film, hence the gaps that might be expected.  And, in this tribute to female solidarity, we don’t hear about the White House’s outing of the CIA undercover operative Valerie Plame, the subject of the feature Fair Game.

Manhunt breaks new ground in the circles of American independent film as a tale that ends, as it did unexpectedly at Sundance, with audiences giving standing ovations to CIA employees. Suppressing triumphalism in the doc, Marty Martin stresses that “the war is not over.” That said, the CIA women are beginning to get their due.