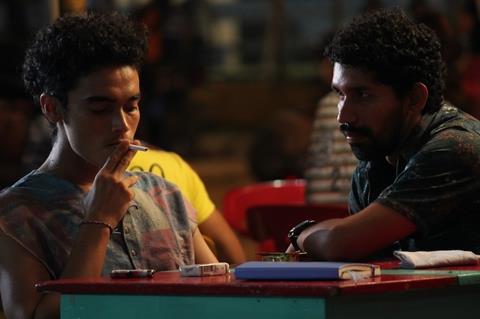 Maria Gamboa’s impressive debut feature, which had its world premiere at the Miami International Film Festival, tackles an old-fashioned subject – good against evil – with a whole lot of style with the film deserving to have profile on the film festival circuit. Modest in scale certainly, but a charming performance by young Carlos Hernandez as the titular Mateo gives the film its heart.

Maria Mateo does a striking job in detailing how a young man discovers the possibility of a new direction.

It is a gently paced film given its short running time, but Mateo is beautifully shot and oddly poetical as it tackles familiar themes such as love, honour, loyalty and friendship.

Set against the backdrop of a small town near the Magdalena River in Colombia, sixteen year-old Mateo works for his loan shark uncle Walter as a collector while also trying to juggle school and playing soccer with his friends. He is a genial charmer – kisses girls when collecting – and making good money, but his school grades are suffering.

He is told by the school that to make up his grades he must the theatre group led by a local priest, and while he hates the prospect his uncle wants to take advantage of the situation by getting Mateo to gather information about the political inclinations of the priest and other group members. His mother is desperate for him not to follow in his uncle’s footsteps and sees the group as a good thing.

Initially he simply can’t bear the brazen tactile theatricality of the group, but comes to embrace the trust from this group of people who gradually develop to be friends. It is a simple journey to redemption, but Maria Mateo does a striking job in detailing how a young man discovers the possibility of a new direction.