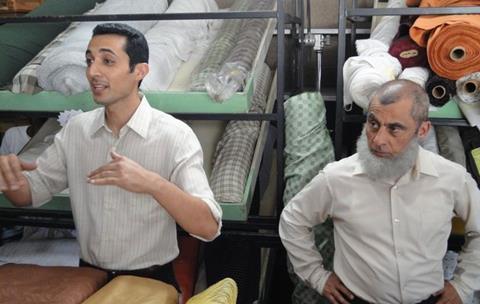 An engagingly made comedy-drama about the Indian South African community, Craig Freimond’s film may well be rather safe and familiar, but it is made with an honest sense of warm-hearted charm. An easy fit into the film festival circuit, it probably lacks the originality needed to break into formal distribution.

While it hits the right dramatic beats there is a sense that any edge might have been taken out in the gestation process.

Playwright-turned-filmmaker Freimond concocts a safely structured tale of a young Muslim shop assistant in Johannesburg who finds himself torn between his desire to be a standup comedian and pleasing his super-conservative family.

Cassim (nicely played by South African standup comedian Riaad Moosa) spends his days at his father’s textile store – hence the title of the film as well as the ‘material’ he uses on stage – but keeps his comedy calling a secret.

His father Ebrahim (Vincent Ebrahim) is a devout man – he won’t event let Cassim’s sister (Zakeeya Patel) have a mobile phone – so it comes as no surprise that things go from bad to worse when Ebrahim finds out what his son has been up to after hours.

Apparently Freimond’s screenplay has been workshopped over several years, and while it hits the right dramatic beats there is a sense that any edge might have been taken out in the gestation process. Where it does work is in the use of locations (largely set in the Indian suburb of Fordsburg) and a fine sense of dialogue and family relationships.