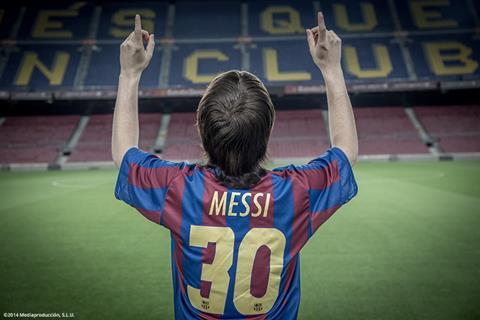 A must for fans of the beautiful game, Alex de la Iglesia’s absorbing and fascinating documentary about Argentinean soccer legend Lionel Messi by its very nature flies close to hagiography, but the sheer enthusiasm of the people interviewed for Messi’s sublime skills win through in the end. A possible theatrical release in Spanish-speaking territories where football rules, it would have naturally benefited from an Argentina win at the recent World Cup, but the subject matter – and de la Iglesia’s strong reputation – should guarantee further festival screenings.

Spanish director, Álex de la Iglesia raises issues about his difficulties winning supporters of the national team; comparisons with Diego Maradona and hints at the darker side of Messi.

Shot in Barcelona, Buenos Aires and Messi’s hometown of Rosario in Argentina, the film follows the young Messi from his elementary school and the club where he played his first official match, recreating some key scenes of his life for the film, through to fame and fortune with F.C. Barcelona in Spain and with his national team.

The film blends recreations of Messi’s younger days with a number of actors playing the young talent as he rose through the ranks at his local club (in a similar was to recent golfing biopic Seve, but shot in a far better fashion) a familiar format of talking heads debating the man and the player. But Messi uses a different format in that the interviewees are shot in a plush restaurant, eating and drinking as they tell Messi stories.

Always small for his age, his height didn’t stop the youngster from becoming a free-scoring player for local team Newell’s Old Boys. This is the recreations work well, as the film charts his determination and skill set alongside snippets of actual video footage and interviews with friends, teachers and coaches at the club. It became clear he needed hormone injections every day to aid his growth, and while his parents initially did their best the ultimate option became linked with his footballing career. He went for trials over in Spain at F.C. Barcelona on the understanding they would pay for his treatment.

Clearly things worked out, and thanks to fascinating footage of the young talent in Spain the film charts his journey to be one of the greatest soccer players of all time, winning four FIFA Golden Balls and 2014 World Cup Golden Ball.

Spanish director, Álex de la Iglesia (who made dramas such as As Luck Would Have It and Witching & Bitching) raises issues about his difficulties winning supporters of the national team; comparisons with Diego Maradona and hints at the darker side of Messi (who only appears in old interviews and only ever comes across as ordinary), but in the end is happy to let those who knew him – as a child or as an adult player – try and explain just how exceptional he is.