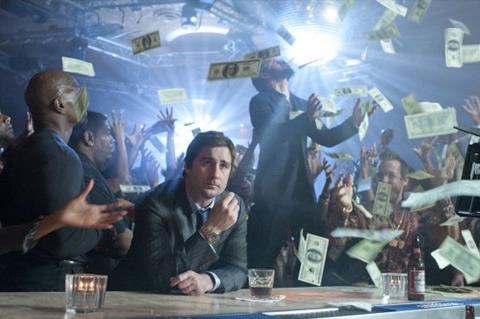 A rangy immorality tale and crime drama inspired by the true story of a mid-1990s company that revolutionized the peddling of pornography online, Middle Men has energy and some sleazy fun around the edges, but critically fails to locate a sincere lasting feeling, be it titillation or trepidation.

Attempts to service the unravelling of Jack’s family life come across as lackluster and perfunctory.

An orphaned Paramount Vantage production that its corporate parent clearly either doesn’t know how to market or feel comfortable selling, the film is releasing Stateside in limited fashion against two other wide releases that will vacuum up the dollars of young moviegoers who would most spark to this material. Mediocre word-of-mouth and a lack of starpower will quickly relegate this tawdry tale to an ancillary existence.

After young Texas family man Jack Harris (Luke Wilson) heads to Los Angeles for a business opportunity, he’s steered by a shady lawyer (James Caan) to Wayne Beering (Giovanni Ribisi) and Buck Dolby (Gabriel Macht), two drugged-up entrepreneurs who’ve cooked up a scheme to deliver sex content over the internet, but fallen out of favor with their criminal underworld partners. Jack reluctantly comes in to settle the business, hatching the crucial idea of serving as a discreetly-named portal between paying customers and adult content producers, who pay them a percentage to handle the billing.

But while Gallo and co-writer Andy Weiss certainly populate Middle Men with plenty of colourful wackos, they get the basic story recipe quite wrong, nervously jumping back and forth in time in a strange effort to provide context. Attempts to service the unraveling of Jack’s family life come across as lackluster and perfunctory. Most damningly, they also saddle the movie with so much literal-minded narration as to drive one absolutely bonkers.

Visually, the movie is appealing, and its technical credits demonstrate lockstep slickness.

Macht and Ribisi are given wide berth to chew scenery, but it’s the latter who most outlandishly connects, working up a bearded character so fueled by drugs and paranoia that he exists in his own demented orbit.

More problematic is Wilson, who utterly lacks either the quiet interior gravitas or wheeler-dealer verve that would give this material more of a punch, either dramatically or comedically.