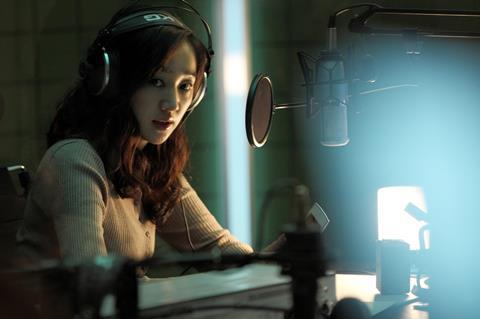 A late night radio show goes haywire in Midnight FM, a better-than-average Korean thriller that despite its plot holes, manages to maintain the tension all the way through. Starring Su Ae (Sunny) and Yu Ji-tae (Oldboy), the film can expect interest from European genre labels and Asian buyers when it is unveiled at this fall’s American Film Market.

Midnight FM benefits from a well-paced script and the charismatic screen presence of Su Ae in the lead role.

Released in South Korea on October 14, it opened top at the box office and grossed $2.4 million in its first four days.

Sun-young is a well-known radio host whose late-night programme of film music has attracted a wide fan following. However, with her daughter in need of an operation, she decides to end the show.

On the night of her last broadcast, she receives a call from a strange, obsessive fan who claims to have broken into her apartment and tied up her sister. He demands that she follow his instructions on the air, or else he will start to kill members of her family.

A second feature by Kim Sang-man, who was less successful the first time around with road movie Girl Scouts (2007), Midnight FM benefits from a well-paced script and the charismatic screen presence of Su Ae in the lead role. The on-air standoff gathers momentum as the film progresses, nonetheless versatile actor Yu Ji-tae’s portrayal of the psychotic caller is disappointingly filled with the usual mannerisms and tics.

Shot almost entirely at night, the film is visually slick, although for a story about a radio DJ the music sound mix is surprisingly flat.