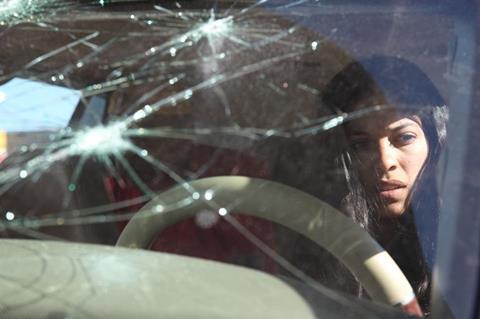 Impossible dreams of a glamorous life collide with the grim everyday reality of a lawless Mexico in Miss Bala (which translates as ‘Miss Bullet’), a darkly ironic tale from writer/director Gerardo Naranjo.

A bullet-strewn finale effectively sums up the sense of moral chaos and bitter irony that runs throughout the film.

The story of how easily one individual can surrender to the implacable demands of a corrupt culture is the basis of a compelling if overlong thriller that sheds some genuine insight into a country where the annual drug trade alone is estimated to be worth $25 billion dollars. Naranjo’s first feature since I’m Going To Explode (Voy a Explotar) should benefit from his growing international reputation and a mature handling of potentially sensational material.

Stephanie Sigman stars as Laura, a 23 year-old in Cuidad, Juarez, whose bedroom walls are festooned with images of Madonna, Audrey Hepburn and other global icons. Her dream is to participate in a beauty contest that will crown the lucky winner Miss Baja California. In the wrong place at the wrong time, she witnesses a raid by the notorious Star gang on a club.Police officers are killed and her close friend is now missing.

Laura turns to the police but finds herself delivered into the hands of charismatic gang boss Lino (Noe Hernandez) who demands a favour in return for her freedom. It is the beginning of a journey that pulls her into the heart of the gang’s activities and a world where it is impossible to find anyone that can be trusted.

Like a latterday Alice, the innocent Laura tumbles into a topsy-turvy world of endless moral dilemmas where all her better instincts only serve to place her in greater danger. Stephanie Sigman’s effective performance captures the character’s growing sense of distress and of being a woman running out of options.

Driven by a strong narrative line, Miss Bala grabs our attention because of a certain disbelief at what is happening to Laura and why there is no conventional white knight riding to her rescue. The film leaves a number of lingering questions in the mind including why Lino and the gang decide to make continued use of Laura rather than killing off what would seem a minor inconvenience to them.

The idea presumably is to show that anyone, especially a pretty young woman, is a commodity to be used at the whim of anyone who chooses to exercise power in what appears to be a vacuum.

Naranjo stages a number of tense action sequences than have neither the flamboyance nor exuberance of a Hollywood production but merely serve to underline the notion that gunfire, death and kidnapping are everyday events on the streets of Mexico’s cities.

He allows the film to drift slightly when Lino uses his persuasive powers to win Laura her place in the beauty pageant. You can almost feel the excitement starting to seep away before Naranjo gets everything back on track for a bullet-strewn finale that effectively sums up the sense of moral chaos and bitter irony that runs throughout the film.