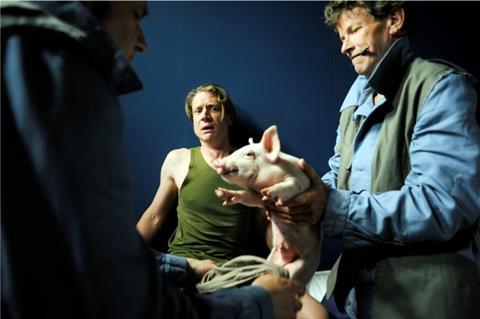 A theatre director on the edge of a nervous breakdown descends into a dark and frankly baffling night of the soul in contemporary Belgian dance choreographer Wim Vandekeybus’ first full-length feature, which closed the more experimental Orizzionti section of this year’s Venice Film Festivall.

Storytelling – seemingly improvised, and oft interrupted – is one of Vandekeybus’s key themes.

An uncompromising lead performance by UK fringe theatre actor Jerry Killick does its best to glue the film’s two virtually unrelated parts together. And there are flashes of disturbing oneiric power in the story once we let go of the fact that it all has to make perfect narrative sense. But though shades of David Lynch and early Lars Von Trier peep through at times, Vandekeybus lacks those directors’ engagement (however conflictual) with cinematic storylines, structures and genres.

Though the information is provided nowhere in the film itself, it comes as little surprise to discover that Monkey Sandwich was originally conceived as the audiovisual component of a dance performance staged by the director in 2010. It may have some standalone potential as a theatrical prospect on home territory at the extreme end of the arthouse market, but elsewhere prospects look to be slim.

Killick plays Jerry, an English theatre director working with a German group on a new production. Coming across as a kind of Waiting for Guffman set in the world not of amateur dramatics but of high art theatre, and occasionally hilarious, the film’s half-hour-long first section burns with a slow satirical fuse, raising interesting questions along the way about our obsessive search for ‘authenticity’ in the fakery that is acting.

But then, all of a sudden, we change location and the fuse splutters out; in fact, it feels like we’re in a different film altogether. We see Jerry and Carly (Wijs), a woman who may or may not be his wife, getting a lift with an American neo-beatnik type, Davis (Freeman), who owns an odd vinyl record of electronic screams and grunts called Monkey Sandwich. Jerry ends up ‘directing’ a project to divert the course of a river in the village where Davis appears to live with a huge brood of kids. From here on in, things just get odder and odder.

Storytelling – seemingly improvised, and oft interrupted – is one of Vandekeybus’s key themes. But the stories told – like Jerry’s ever-changing tale of why one of his fingers is just a stump – are never particularly illuminating, and it’s not until the end that we get some sort of explanation, when a small end-title informs us that the stories included in the film “are urban legends created with the featured actors”. At least this journey into the narrative abyss is engagingly filmed and scored.