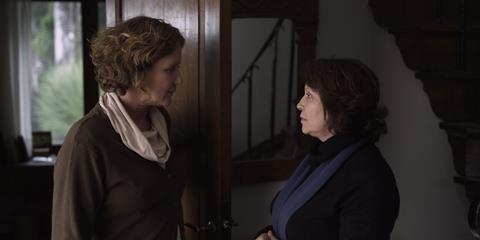 Victoria Galardi’s quirky drama Mount Bayo is a diverting film driven by a series of fine performances. This ensemble film may well be slight in story and structure, but it is a well-made film deserving of attention.

Things twist and turn quite nicely…

It received its world premiere in Official Selection at the San Sebastian Film Festival, and could well crop up at other festivals, especially those favouring Latin American titles.

With ski season approaching in a small Patagonian town at the foot of Mount Bayo, one family’s modest life is disrupted when the family matriarch attempts to commit suicide. As she lies in a coma, she is tended by her daughters – Marta (Adriana Barraza), who still lives nearby with her husband and two grown-up children, and Mercedes (Veronica Llinas) who flies back from Buenos Aires.

This oddly dysfunctional family deals with the situation in different ways, especially when news spreads that the old woman had recently won a good deal of money at a local casino. While Mercedes needs cash to cover debts back home, Marta simply wants to tend her mother.

Things twist and turn quite nicely…everyone changes slightly and the money is a plot device rather than an actual end product. The Patagonian locations are impressive and the cast top-notch – especially Veronica Llinas as the far more mercenary Mercedes. Mount Bayo is a nicely balanced film – in truth it could have been a bit more quirky and odd, but it is diverting nonetheless.