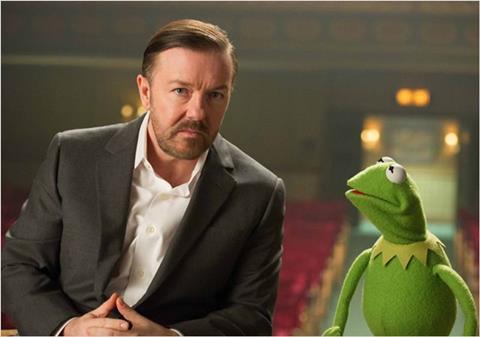 A harmless if largely uninspired musical comedy offering that casts Jim Henson’s puppet creations on a globe-trotting adventure, Muppets Most Wanted shrugs, sings, wings and winks its way through a caper narrative, figuring or hoping that simply consistently acknowledging its shambolic narrative will somehow translate as wit. A lesser effort than its predecessor in every way, this cheerful confection will largely appease younger viewers but leave older audiences unstirred.

The follow-up to The Muppets, which, with $165 million in worldwide theatrical receipts, was the highest-grossing film in the series and the first to gross over $100 million, Muppets Most Wanted opens Stateside March 21 against expected young-adult action-adventure juggernaut Divergent. As such, it may have a hard time replicating the grosses of its antecedent, though the film’s international locations should help further bolster robust overseas returns (where The Muppets pulled in over 45 percent of its haul) and ensure the health and viability of the franchise moving forward.

On the heels of their triumphant reunion (the movie literally picks up right where The Muppets left off, on Hollywood Boulevard), the Muppets are casting about for how to capitalise on their recaptured popularity when an unscrupulous manager, Dominic Badguy (Ricky Gervais), sells them on the idea of letting him book them on an international tour. Kermit the Frog frets that they haven’t had adequate time to hone their variety show, but Miss Piggy, Gonzo, Fozzie Bear, Animal and the other Muppets are excited by the possibilities, and Kermit relents.

Dominic, however, is actually in cahoots with Constantine, the world’s most dangerous frog — and a dead ringer for Kermit, save a mole on his face. Once Constantine slaps a faux beauty mark on an unsuspecting Kermit, the latter is shipped off to a Siberian gulag overseen by prison guard Nadya (Tina Fey). Constantine does a very poor impersonation of Kermit, but the naïve Muppets (except Animal) don’t seem to notice, and so Constantine and Dominic’s scheme to use the Muppets as cover for a number of heists that will eventually lead them to the crown jewels of London continues unabated, while Interpol agent Jean Pierre Napoleon (Ty Burrell) and his investigative partner Sam Eagle struggle to keep up.

Both earnest and irreverent, The Muppets was one of 2011’s most pleasant big screen surprises, and Muppets Most Wanted returns many of the key players of the franchise’s revitalisation, including director James Bobin, co-writer Nicholas Stoller, cinematographer Don Burgess, composer Christophe Beck and editor James Thomas.

The story this time feels small and miscalculated, however, and minus the mooring presence of that film’s Jason Segel and Amy Adams, there isn’t an engaging enough connection between the Muppets and the human actors. Only Burrell, mining a few laughs from a thawing adversarial relationship with Sam Eagle as well as a European affinity for inopportune rest breaks, feels truly connected to the material. In both their storylines and performances, Gervais and especially Fey feel somewhat like an adjunct to proceedings rather than a necessary part of the tale.

Choreographer Francesca Jaynes oversees a couple song-and-dance routines, but Muppets Most Wanted also seems more stuck on showcasing no-strings, full-body dance and other movements — like the duet “I’m Number One,” between Constantine and Gervais — at the sake of less complicated but more emotionally involving musical numbers.

Bret McKenzie, who two years ago won an Best Original Song Academy Award for “Man or Muppet,” ducks in and out of self-referentiality on tunes like the catchy opener, “We’re Doing a Sequel,” but the film works best when its musical numbers have both a strong narrative and stylistic connection to the story, as with the mock-suave R&B croon of “I’ll Get You What You Want,” in which Constantine tells Miss Piggy and later the Muppets everything they want to hear. Unfortunately, there aren’t a lot of those tunes in Muppets Most Wanted, and the wan heist and prison break material in Bobin and Stoller’s script doesn’t rise to the level of inspired.

As a welcome bonus, though, a Monsters University-themed five-minute short film, Party Central, plays before the film, and finds Sulley and Mike Wazowski devise an amusing solution to the lifeless party of their Oozma Kappa mates.