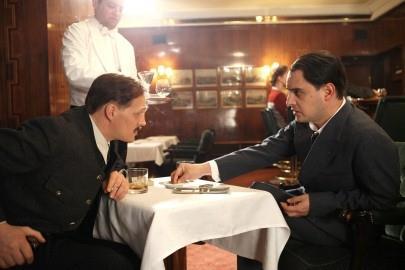 Inglourious Basterds opened the gates, now get ready for the flood. Wolfgang Murenberger, whose caustic portraits of present day Austrian society (Sillentium, The Bone Man) and its dirty underbelly, were hits on the German speaking market, has taken the plunge and moved to WW2 which he treats pretty much as a playground, as well.

The light, almost relaxed way his scenes are played, most particularly his caricatured Nazis who look too silly to be dangerous, lend the entire proceeding something of an operetta touch.

With two top German stars, Moritz Bleibtreu and Georg Fridrich, playing the leads, and with his deft, professional touch keeping the scenes rushing one after the other without giving the audience too much time to mull over them, My Best Enemy (Mein Bester Feind) will do business domestically,  beyond that, this will possibly not be either his most alluring or profitable outing.

Adapted by veteran scriptwriter Paul Lengge from his own novel and then further whipped into shape by Murenberger himself, the story, set in Vienna in 1938 just before Hitler is about to move in, focuses on Viktor Kaufmann (Bleibtreu), the young, presentable, brash and resourceful son of a Viennese Jewish gallery owner and Rudi Smekal (Fridrich), the son of a servant who grew up and was treated as a member of the household.

The two meet again at gallery Vernissage when Kaufmann Sr. (Udo Samel) tells the press he is in the possession of a rare, unknown Michelangelo sketch, already authenticated by some of the world’s major experts. Next day, the Nazis take over Austria, Rudi puts on the SS uniform and leads his new masters to the Kaufmann home, to get the priceless drawing.

It is finally produced in exchange for a free passage for Viktor and his parents to Switzerland, but instead, once the drawing is delivered, they are all sent to concentration camps.  Five years later, Germany is retreating on the Russian front, Hitler wants to cement his alliance with the Italian fascists and wishes to present Mussolini in person with the Michelangelo sketch confiscated from the Kauffmanns. But at the last moment, it turns out they only have a poor copy, not the original.

Rudi is dispatched to the camps to find Viktor (his father had died in the meantime) and through him, obtain the real thing. At this point the plot starts falling apart and goes for any kind of subterfuge that will keep it floating, including mistaken identities (Viktor saves Rudi’s life but puts on his uniform, pretending to be Smekal), until it finally sails faltering into a happy ending that on second thoughts isn’t that happy after all.

Neither as outrageous as Tarantino’s madcap fantasy, and lacking the dry wit, the perspicacity and the originality of Lubitsch’s To Be or Not To Be, Murenberger’s film does try to make a few points of its own, whether it is underlining “the king’s new clothes” concept which says that the uniform counts more than the man, or that one reason among many for anti-Semitism, was envy and greed. No real news, but undoubtedly true.

He also claims, rightly, that unlike Tarantino, his film is not about revenge but survival. On the other hand, what Murenberger’s film lacks most of all is the terrible pain and anguish which ruled over this entire period.

He does keep an alert pace, and there are often amusing moments - if one can forget the background or ignore it – which might soon become pretty easy for younger audiences. But the light, almost relaxed way his scenes are played, most particularly his caricatured Nazis who look too silly to be dangerous, lend the entire proceeding something of an operetta touch which is bound to rub certain audiences very much the wrong way.

Bleibtreu’s Viktor Kaufmann never appears to be really worried about his life or his future, while Fridrich’s Rudi looks like a hopeless bumbler with a bemused look on his face. Still, with a different background, this might have been a serviceable yarn for an American comedy thriller. But that was not the intention here, or at least so it seems.  Neither the plot of this farfetched caper nor Murenberger’s approach to it, do any kind of justice to what is still, whether some people like it or not, one of the most terrible episodes in human history.

Screenplay: Paul Hengge based on his own novel, adapted by Wolfgang Murenberger