My Life In Ruins 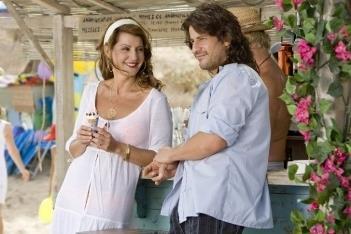 Nia Vardalos wrote and starred in 2002’s improbable hit My Big Fat Greek Wedding. Her week’s tour around Greece with a busload of monstrous tourists in My Life In Ruins may convince audiences to make other travel plans.

This odyssey (executive-produced by Tom Hanks and his Greek-American wife, Rita Wilson, who also takes a small role) could connect with some curious die-hard fans of Greek Wedding, which topped $350m in worldwide theatrical revenues. But Vardalos’s marketability has faltered since then (her sole theatrical outing being 2004’s Connie And Carla), and this new laugh-deprived venture won’t help.  Women over 40 might be drawn to the story’s quest for love among the ruins, but the script’s crude jokes seem aimed at a less mature audience, and there’s nothing about the cast or the setting to attract a young crowd.

International interest could be limited to Greece and Spain (which co-financed and provided two actresses in the cast). Unlike the Greek temples Vardalos visits as tour guide Georgia, My Life in Ruins is unlikely to stand the test of time, in home video or other ancillary.

Georgia is a 40-ish classics scholar who has lost her career and her “kefi,” Greek for what she calls “mojo.” She’s in Athens to get it back – not easy working as a tour guide for dumb Americans, drunk Australians, and ancient Brits.

A dodgy Greek colleague, Nico (Alistair McGowan), makes sure she gets a smoky bus driven by a bearded misfit, and a fractious tour group who’d rather shop than see the Parthenon. In case you haven’t guessed, the journey’s destination is love, Hollywood-style.

Directed by Daniel Petrie (Miss Congeniality), My Life in Ruins doesn’t tread beyond the template of travel farces in the Chevy Chase mould. The film has the feel of a vaudeville show, with a series of stock characters entering and exiting, hamming for the camera as they go. The script by television writer Mike Reiss excavates old comedy jokes about lonely single women’s sex woes and corrupt foreigners, leavened only by toilet humor and the inevitable gay Greek lines.

The screenplay helps explain why Vardalos can’t bring any mojo to her role as Georgia. We’ve seen this Cinderella/Under the Tuscan Sun set-up too many times, and neither costuming nor photography can transform her character into an Aphrodite. The story’s Dionysus is Irv (Richard Dreyfuss), a widower trying to convince women of his priapic sexual powers. Dreyfuss’s brio stirs up energy in the ensemble, yet he over-serves the schtick  and sentimentality.

One surprise is the Greek actor Alexis Georgoulis, who plays bus driver Poupi (“Poopy”, which should make the under-twelve set roar). Once shorn of his long hair and beard, he has a dark Mediterranean allure that the rest of the cast lacks. As her scheming fellow travel guide Nico, Alistair McGowan steals every scene that he’s in, fighting wildly against the script in the villain’s role.

Shots of Greek sites are as you’d expect, but any cross-marketing potential for My Life in Ruins (part of which was shot in Spain) has to be scuppered by a film which depicts the country as a corrupt place where showers don’t work and merchants rob you blind.