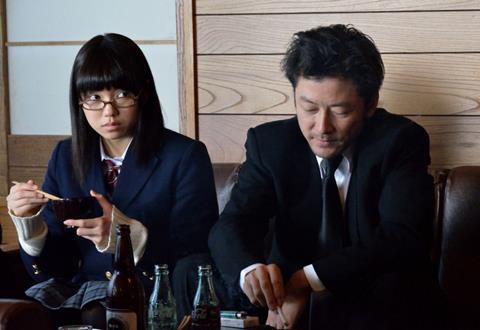 A disturbing drama, wonderfully performed and featuring some mesmerisingly beautiful moments, Kazuyoshi Kumakiri’s film – an award winner at the recent Moscow International Film Festival and which was a centrepiece of the New York Asian Film Festival – is a gently odd and disquieting tale of two lost souls bound together by their need for love and family.

Fumi Nikaids (whose Why Don’t You Play In Hell? premiered at Venice last year) is quite astounding as the tormented but manipulative Hana, and she is perfect in the transition from spectacled schoolgirl to elegant woman.

My Man (Watashi no otoko), based on Kazuki Sakuraba’s controversial best-seller, is driven by striking lead performances by Tadanobu Asano and – most especially – Fumi Nikaido, and while it may shock some audiences with its depictions of sexual control it is one of the most powerful Japanese dramas in recent years.

The harsh and unrelenting opening scenes are set in the aftermath the 1993 tsunami in Okushiri. Ten year-old Hana (grim faced and clutching onto a bottle of water) is found by 26 year-old Jungo (Asano), a distant relative, who decides to take her in and look after her – and create a ‘family’ – once he finds all of her direct relatives are dead.

A few years later they are living together in Hokkaido, the northernmost part of the Japanese archipelago, where Jungo makes a living cooking for coast guards onboard ship and teenage Hana (Nikaido) it at the local school. Jungo has a sexual relationship with local woman Komachi (Aoba Kawai), daughter of his old friend Oshio (veteran actor Tatsuya Fuji, from In The Realm Of The Senses), but Hana dislikes her and the two are each jealous of the other’s relationship with Jungo.

Jungo’s homecoming from work becomes increasingly vital to Hana, and the film slowly and sensuously reveals they have an profoud sexual relationship (there is a beautiful ‘dream’ scene as they make love with blood dripping onto them) with their notion of ‘family’ somewhat more intense than may be approved of. When old Oshio spots them through the window of their ramshackle house Hana takes it opon herself to ‘deal’ with the situation – a wonderfully powerful scene on the nearby ice floes of Hokkaido that will linger in the memory of these who see the film.

The film moves on again to Tokyo where Hana has grown into a beautiful and controlling young woman while Jungo has simply become a drunken slouch who wallows in rubbish in their tatty apartment, but clings to the notion of their ‘family’. As she starts to move on he clings to the memory of what they were together, with her sexual intensity still part of the link that binds them.

Fumi Nikaids (whose Why Don’t You Play In Hell? premiered at Venice last year) is quite astounding as the tormented but manipulative Hana, and she is perfect in the transition from spectacled schoolgirl to elegant woman. The scene of her and Oshio together on the ice floe are quite astounding, and she works well with Tadanobu Asano (Café Lumiere, Mongol) as a man caught in a perverse variation of family. My Man is an impressively twisted love story that challenges and provokes as it charts this most unusual of relationships.

Screenplay: Takashi Ujita, based on the novel by Kazuki Sakuraba