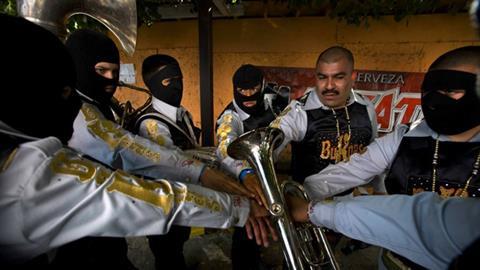 As a closing caption informs us, the drug war in the Mexican border town of Ciudad Juarez has claimed 60,000 lives since the stand-off between rival cartels began in 2006. By this time the number seems almost on the low side, so inured have we become to seeing the bodies pile up, not all of them in one piece.

Never overly didactic or Michael-Moore-ish in its alternation of cartel-worshipping US kids and the pain, horror and desperation that they cause, this is a powerful, angry, stomach-pummelling documentary that leaves us to draw our own conclusions.

But Shaul Schwarz’s harrowing, necessary documentary, which played in the Berlin Panorama section after its Sundance debut, does more than simply chart the horror of this savage turf battle. It juxtaposes a daily diet of death, violence and fear – as seen through the eyes and voice-over words of a Mexican crime scene investigator – with the hopes, dreams and braggadocio posturings of an LA-based ‘narcocorrido’ singer, rising star of a Latin dance music genre that glorifies the cartels and their gun culture in its lyrics.

It’s a tough, bleak watch, and one that holds out little hope for a ravaged society. But Narco Cultura should nevertheless travel widely to other festivals and beyond. It helps that it looks and sounds good on a big screen, with its mix of guerrilla handheld footage and impressively cinematic landscape and set-piece photography, its interleaving of narcocorrido pop and Moby-like mood-music. Just as well, as TV distribution may be problematic given the sometimes brutal scenes of charred bodies, and in one just-glimpsed but still chilling video put online by one of the cartels, a rival gang member being decapitated with an axe.

At home in the US, this should be prescribed viewing. But this being the real world, it will need to overcome the head-in-the-sand syndrome that Richi Soto, its ordinary-hero cop, reflects on towards the end: “Nobody wants to know 50 metres from here”, he says, referring to Juarez’s cross-border neighbour, El Paso, and the wider USA; “they just close their eyes”.

An Israeli photojournalist who has covered several more conventional wars in a 20-year career, Schwarz shot most of the film as one-man director, cinematographer and soundman. The pay-off is the unprecedented access that he was given to his subjects in every aspect of their life and work. In the course of the film we see the mild-mannered but dignified and quietly professional Richi and his colleagues collecting still-warm bodies from crime scenes with distraught relatives looking on from behind the cordon; we see how the CSI cops live every hour in fear of reprisals from the cartels (in the course of the film, we learn that one of Richi’s colleagues in the SEMEFO forensic department, who appears here on camera, was gunned down outside his house); we see their bitterness and fatalism as they talk, guardedly, about corruption in high places and the connivance between drug lords and the public sector.

Interleaved with these scenes of the Juarez frontline is the film’s other strand: the huge popularity of gun-toting narcocorrido music, as personified by 27-year singer Edgar Quintero. It helps that the chubby Quintero, who sings (while toting a bazooka) with the band BuKnas de Culiacan, is a likeable enough guy for all the Latin gangsta poses he adopts. When he crosses the border with the band to play in the Sinaloa Cartel stronghold of Culiacan – a city he and his fellow musicians have never been to, despite their name – the BuKnas boys seem a little cowered and overawed by the experience. We follow them into the blingy mansion of a drug lord, and look on as they are given a tour of the local cemetery – with its Beverly Hills section of tacky cartel mausoleums, some of which have bulletproof-glass windows.

Never overly didactic or Michael-Moore-ish in its alternation of cartel-worshipping US kids and the pain, horror and desperation that they cause, this is a powerful, angry, stomach-pummelling documentary that leaves us to draw our own conclusions – once we’ve got over the shock of what’s portrayed here.