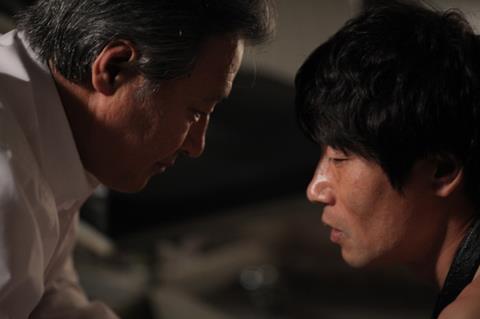 Extremely grueling and painful to watch, National Security is a tough sell, but director Chung Ji-young’s unyielding approach to convey the torture experienced by the late Kim Geun-tae is likely to attract attention, which in and of itself should make it a feature on the festival market.

Chung adopts a minimalist but highly commendable approach focusing only on what matters, and so there is no elaborate cinematography or complex editing.

Chung who was also in Busan last year for his previous film Unbowed has been making films since the 1980s, but it is only in the last year that his films have regained the spotlight after a 13 year hiatus.

The film is based on the memoir written by the famous politician Kim Geun-tae who was once imprisoned by the Korean Central Intelligence Agency (KCIA) for 22 days during the military dictatorship for his role in the pro-democracy movement in the ‘80s.

For much of the duration, the film takes place in the room where Kim is tortured, and given the graphic nature of some of the scenes together with the lack of any subplots to give viewers any respite, watching the film can be an excruciating experience, which caused some people to walk out of the screening in Busan.

Much like Unbowed, Chung adopts a minimalist but highly commendable approach focusing only on what matters, and so there is no elaborate cinematography or complex editing; instead, the film is solely focused on the character of Kim Geun-tae and those who torture him. As a result, a heavy burden is put upon Park Weon-sang, but he is able to play the part with admirable conviction and authenticity, together with the rest of the cast.

Although it’s still without a distributor, it’s likely to be picked up soon with a possible release date before the South Korean presidential election in December. Commercially, given the popularity of Kim in Korea, it has the potential to perform as well as Unbowed that generated more than three million admissions ($23 million). Elsewhere, however, it’s unlikely to secure a wide release, but could feature at art-house cinemas and festivals.