Nativity 2: Danger In The Manger! 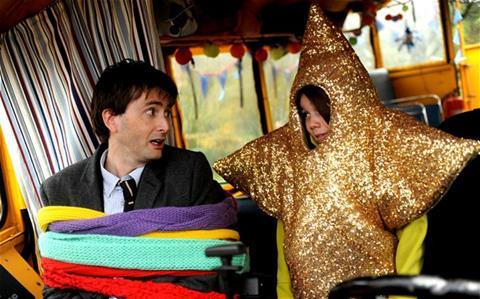 Comedy sequel Nativity 2: Danger In The Manger! may well be short on laughs or entertainment for grown-ups but it well-and-truly hits the funny bone for its target audience…those under 10 years-old and who love their humour broad and simple.  The film took a hefty $2.5million over its UK opening weekend and should have a strong life in the run-up to Christmas, though its ability to breakout internationally will be strictly limited.

It strikes a chord with young ones.

Writer/director Debbie Isitt has brought together many of the cast from the original school-set film Nativity!, and added to the pot Scottish actor David Tennant (who played Doctor Who on television for several seasons), who has a genial comedy ease and responds well to her semi-improv filmmaking style.

Tennant stars as David Peterson, a new teacher at St Bernadette’s primary school, taking over the class after a series of substitute teachers have been driven away due to children’s antics and the over-enthusiastic behaviour of Mr Poppy. The kids – an engagingly quirky bunch – all adore Mr Poppy, who has committed to take them to take part in a televised schools’ ‘A Song For Christmas’ choir competition taking place in Wales.

There are plenty of simplistic gags as the kids wend their way to Wales – in fact the journey takes way too long when the film should be an awful lot tighter in this central section – but at least they gather a donkey and a baby to take along to the competition itself.

Add to the always over-laden pot the fact that Petersen’s stuck-up twin brother Roderick (also played by Tennant) is in charge of a posh rival class of singing schoolchildren and the fact that Petersen’s wife is pregnant, and you have a sweet-natured series of performance sessions that allow the kids to show-off to good effect and for the spirit of Christmas to be reinforced.

It is a simple and rather obvious film that also happens to run 10 minutes or so too long, but it strikes a chord with young ones and with a young fan base in place from the original film it should be a success (in the UK at least) with a strong home entertainment life to follow.