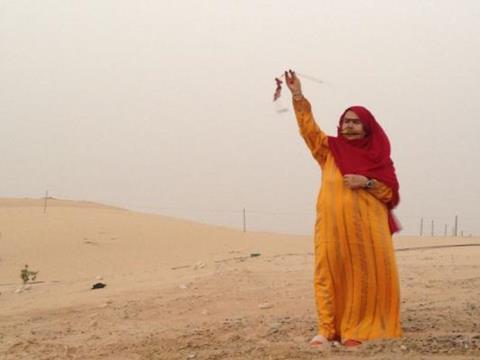 The engaging and insightful story of Fatima Ali Alhameli, the first Emirati woman to enter her camels in the UAE’s camel beauty pageant competition and to take part in Abu Dhabi’s camel auctions is a rather charming film, with Alhameli a delightfully forthright woman who juggles mobile phone, camels and her family in her determination to represent Emirati women in this largely male bastion.

Director Nujoom Al Ghanem does an impressive job of crafting a fine profile of a wonderfully determined and charismatic woman.

Writer/director Nujoom Al Ghanem’s Nearby Sky (Samma Qarribah) is a gently inspiring film, but best of all one that profiles a wonderfully determined woman blessed with a gritty charm and a never-give-up spirit. She is a women convinced she is right and most other people are wrong, and while blunt and obstinate there is a rather playful underlying charm to her.

Fatima Ali Alhameli is a Bedouin woman, who was married at 15, never learned to read and is at her happiest living out in the desert, where she says “I feel he sky is nearby and God is close to me”.

With her loyal – though often bemused - Sudanese camel-wrangler Mohammed Nekhair Diemich Al Hameli, she goes against cultural expectations with her attitude and sheer confidence that her camels should be winning beauty pageant prizes. She has her eyes one the red Range Rover that is the main prize, but more importantly the honour of having saffron daubed onto a camel that is highly placed.

The film flits between camel beauty pageants, auctions in Abu Dhabi, debates with her sons on how they were raised and their own ambitions to show camels, her visits to a beauty salon and – most engagingly – her grumpily warm relationship with Mohammed. He admits to be not being able to understand her accent to begin with, while she says she doesn’t get his Arabic at times, but he loyally listens to her gruff commands and also reads from the official pageant programmes to her.

Her love of the desert is the other key theme (and appreciation for camel milk, which she says helps her sleep) with director Nujoom Al Ghanem doing an impressive job of crafting a fine profile of a wonderfully determined and charismatic woman.