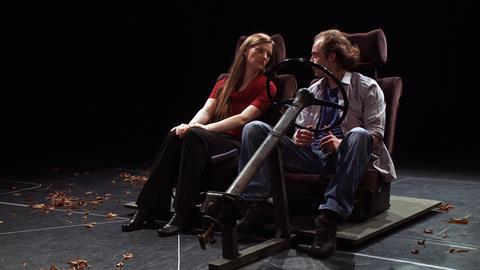 Drama, documentary and performance are fused to good – if never overly original or memorable - effect in German film Negotiating Love (Beziehungsweisen) which presents couples improvising problems with their relationships in front of real-life therapists. Director Calle Overweg describes the film as “an acted documentary”, though for much of the time it feels more like a theatre-performance piece.

The marital dramas themselves are modest and even mundane.

Using a very simple format and backdrop – three pairs of actors portray couples who discuss their “issues” with three therapists in an empty space set – Overweg explores the nature or love in relationships and how discussion can help (or at least focus attention) on what happens when a relationship starts to disintegrate.

The three stories interweave during the sensibly quite bring running time, with Overweg also taking part in proceedings as the ‘director’ who is overseeing the filming. As well as couples talking to the therapists they are also called upon to act out scenes from the marriage, making use of a sofa, bed, telephone and even  a mock-up of a car.

Heiko (Hartwig) and Amelie (Haverland) play a young couple who are expecting a child. She is thinking about an abortion while he is keen on a baby, though things are complicated because he had recently had an affair. They talk to couples’ therapist Joachim Maier.

Retired couple Eva (Kleinert) and Siegfried (Selle) can barely communicate, though as they discuss their relationship with psychologist Marion Braun and gradually reveal that she has withdrawn from her husband due to his repeated affairs over the years.

Hermann (Altenburg) and Dorothea (Safaei-Rad) are struggling to keep their marriage together after the arrival of children and are constantly arguing. He is a would-be screenwriter working from home, while she is working on a low-budget film and has fallen in love with the cameraman. They discuss their problems with social worker, marriage and family counselor Heidemarie Zunken-Kreplien.

There are moments of humour as the actors – who heavily rehearsed their improvised roles in preparation for their therapy sessions – unpeel the layers behind their characters. Perhaps most amusing is Hermann’s sense of affront that is wife should fall for a cameraman rather than the director.

The marital dramas themselves are modest and even mundane, but the underlying truth about how couples try and deal with problems in relationships is an honest one, and Calle Overweg smartly never tries to over-egg matters. The film is dialogue heavy that does lead to moments of overlapping sequences that make the sub-titles a challenge to follow. The film is intriguing rather than fascinating and likely to be a tough sell, though broadcasters may be interested in the docudrama structure.