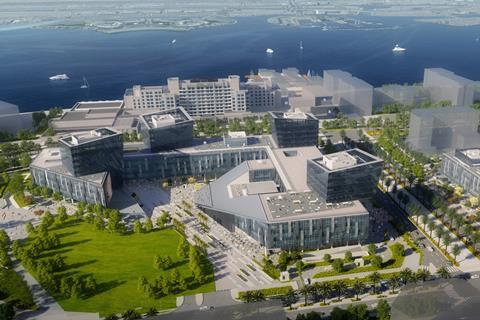 Abu Dhabi’s Yas Creative Hub will officially open in the fourth quarter of 2021 and will include 70,000 square metres of studio and post-production space, as well as offices and community spaces.

The facility is being rolled out in three phases over the course of a decade and will double the annual capacity of Abu Dhabi’s burgeoning film and TV production and services sector. US productions 6 Underground and Dune, Bollywood blockbuster Bunty Aur Babli 2 and Saudi-set soap opera The Inheritance are among the projects to have shot in Abu Dhabi over the last 24 months

On its completion in 2031, the Yas Creative Hub aims to have enough space to accommodate more than 16,000 professionals, working in both traditional and new creative sectors, eventually spanning 270,000 square metres.

“We’re exactly one year from its official opening,” said Michael Garin, CEO of twofour54 Abu Dhabi, the government-backed organisation at the heart of the emirate’s strategy to become a leading content creation hub in the Middle East.

Garin noted the design of the workspaces had been modified as a result of the Covid-19 pandemic to take into account the new era of homeworking and digital interconnectivity, which has been fast-tracked by the global health crisis and is likely to persist into the future.

Another prong of the project will also be the construction of 6,100 affordable housing units for young professionals. “Up until now, Abu Dhabi has been a somewhat expensive place. And in order to attract the crew and young coders and developers, we need more accessible housing,” said Garin.

Under the first phase, some 600 companies and more than 5,000 professionals will move from Twofour54 Abu Dhabi’s current sites in the Khalifa Park and Musaffah districts of the emirate into the new hub. Companies already signed up for the new location include US news network CNN, French video game company Ubisoft and software company Unity Technologies, which recently signed a 10-year partnership with Twofour54 Abu Dhabi.

Under the partnership, Unity has made Abu Dhabi the base for its Middle East and Africa regional headquarters and has committed to joining forces with twofour54 in creating a gaming centre of excellence at the Yas Creative Hub.

“Mohammed Al Mubarak [the chairman of twofour54 Abu Dhabi] has been quoted numerous times, saying film and television have gotten us where we are today. But gaming and digital will bring us to where we want to be tomorrow,” said Garin.

In the backdrop, Garin said twofour54 Abu Dhabi and its film and TV production company Image Nation are gearing up for a busy 2021 in terms of both incoming and local productions. He suggested Abu Dhabi’s handling of the Covid-19 pandemic, which has kept cases low in the emirate, was proving to be an important draw for international productions seeking safe locations to shoot.

“We’re [been able to] maintain over $100m of physical production throughout the pandemic. Iceland is the only other country that can say the same,” he suggested.