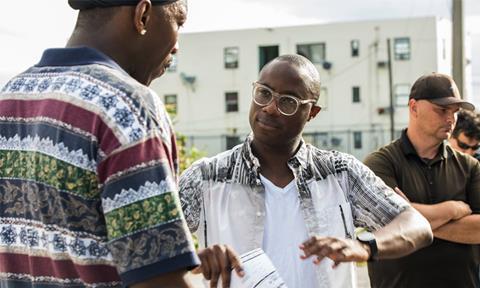 Amazon has announced that Moonlight director Barry Jenkins [pictured centre] is developing a script-to-series one-hour original limited drama based on Colson Whitehead’s award winning novel The Underground Railroad. The Oscar-winner is set to write and direct.

The Underground Railroad, published by Doubleday, was a New York Times bestseller and the winner of the 2016 National Book Award for Fiction. The story chronicles young Cora’s journey as she makes a desperate bid for freedom in the antebellum South.

After escaping her Georgia plantation for the rumored Underground Railroad, Cora discovers no mere metaphor, but an actual railroad full of engineers and conductors, and a secret network of tracks and tunnels beneath the Southern soil.

“Going back to The Intuitionist, Colson’s writing has always defied convention, and The Underground Railroad is no different,” said Barry Jenkins.

“It’s a groundbreaking work that pays respect to our nation’s history while using the form to explore it in a thoughtful and original way. Preserving the sweep and grandeur of a story like this requires bold, innovative thinking and in Amazon we’ve found a partner whose reverence for storytelling and freeness of form is wholly in line with our vision.”

“Colson Whitehead’s book is a sweeping, character driven, boundary destroying epic,” said Joe Lewis, head of comedy, drama and VR, Amazon Studios. “Having Barry bring it to life for Amazon Studios is thrilling. We couldn’t be more excited to see what they create.”

Jenkins will executive produce under his Pastel banner, alongside Brad Pitt’s Plan B.