Festival to open with Michaël Dudok de Wit’s The Red Turtle [pictured]; Guillermo del Toro and Aardman to give masterclasses. 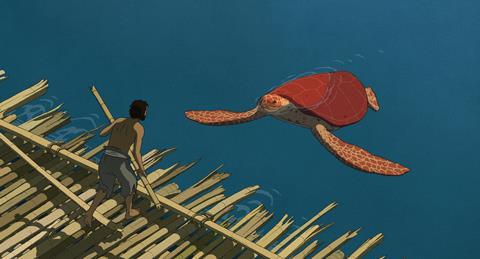 The festival will open with Michaël Dudok de Wit’s The Red Turtle, which will premiere first in Official Selection at Cannes.

Other highlights include a preview screening of Chris Renaud and Yarrow Cheney’s The Secret Life Of Pets, in the presence of the directors. Andrew Stanton will also attend the festival, accompanying Finding Dory.

The popular Work in Progress screenings will include French cartoonist Benjamin Renner’s Le Grand Méchant Renard and Japanese director Sunao Katabuchi’s In This Corner Of The World as well as Trolls by US film-makers Mike Mitchell and Walt Dohrn.

There will also be masterclasses by Guillermo del Toro, in which he will unveil new images of Trollhunters, and Aardman Animation founders Peter Lord and David Sproxton.

For the first time this year, the lakeside festival will fete French animation with a number of side-bars including The Mirror Effect, looking at the perception of French animation from outside the country, and an exploration of the territory’s animation from the 1980s onwards asking whether there is a “French touch” in the genre.

In keeping with the French focus, prolific animation producer Didier Brunner – whose credits include Kirikou, Ernest and Celestine and The Belleville Triplets – will receive the festival’s Honorary Cristal.

The festival said it had received a record number of submissions this year, 2,700 entries, against 2,606 in 2015, from 85 countries. A total of 236 films made it into the final selection.

Monkey King: Hero is Back by Tian Xiaopeng (China)

Regular Show: The Movie by JG Quintel (US)

The Anthem Of The Heart (Japan)