Dawn of the Planet of the Apes tops UK box office 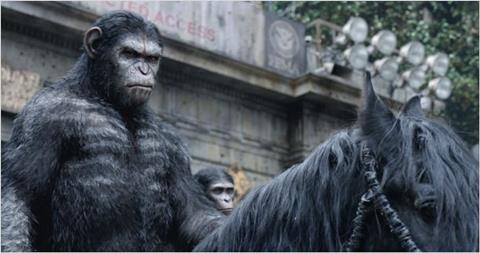 Defying the weather, Dawn of the Planet of the Apes is off to an excellent start at the UK box office, landing top on debut.

In terms of 2014 openings, Dawn recorded the fourth biggest opening of the year but if you exclude previews, it’s the second biggest Fri-Sun takings behind stablemate X-Men: Days of Future Past.

Given its extended previews, it is effectively in its third weekend at the UK box office and has so far amassed $26.5m (£15.52m). Its first target is to surpass Transformers’ $40.1m (£23.5m) UK lifetime gross, but Age of Extinction may struggle to challenge the series’ highest grosser, Dark of the Moon’s $48m (£28.11m).

A strong weekend for event cinema releases saw two chart in the top five and one break a UK record.

Charting fourth was Picturehouse’s Monty Python Live (Mostly) with a non-final opening of $2.2m (£1.26m) from its 580 cinemas last night [July 20]. Including advance encore sales, the final ever performance of the comedy icons from the O2 has grossed $2.6m (£1.64m).

The opening is sixth on the all-time list of event cinema releases, behind the likes of Doctor Who: The Day of the Doctor, and marks a great result given it was simulcast on TV.

Equally impressive was CinemaLive’s release of André Rieu’s 2014 Maastricht Concert which grossed $1.4m (£830,586) from its 410 sites on July 19-20 to chart fifth. This marks the highest grossing music concert event release of all time in the UK, following the record-breaking opening of Rieu’s 2013 concert.

Richard Linklater’s critically acclaimed latest feature is now up to $1.5m (£896,000) in the UK and will shortly hit the £1m mark, a feat not achieved by his noted Before trilogy.

That marks the lowest-ever opening for Nick Moore’s directorial outings, which includes the $2.2m (£1.3m) bow for Horrid Henry: The Movie. The film, about the Britain’s Got Talent winner, faces family competition this week with the arrival of Earth to Echo.

Mike Myers’ directorial debut Supermensch: The Legend of Shep Gordon posted a UK bow of $7,000 (£4,097) from its 12 sites through Dogwoof.

Trinity’s Believe and StudioCanal’s The House of Magic both receive wide releases, while Curzon Film World’s Joe and Arrow Films’ Northwest are among the films receiving a limited release.