Arnold Schwarzenegger: I will be back in next 'Terminator' film 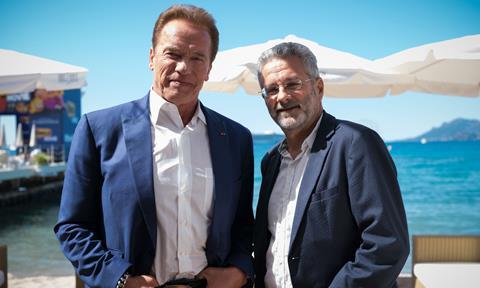 Arnold Schwarzenegger has said that he will be returning to the Terminator franchise and that a planned Twins sequel is set to go ahead soon.

Speaking to Screen in Cannes, where he is talking up new environmentally-focused documentary Wonders Of The Sea 3D with producer Francois Mantello [pictured right] and co-directors Jean-Michel Cousteau and Jean-Jacques Mantello, Schwarzenegger confirmed that he will star in a new Terminator film produced by James Cameron.

“It is back,” commented Schwarzenegger, who revealed that he had met Cameron recently and discussed the project. “It is moving forward. He [Cameron] has some good ideas of how to continue with the franchise,” the actor added, “I will be in the movie.”

He also said that a potential Conan reboot starring Schwarzenegger isn’t dead. “It’s being rewritten…the idea is to do it.”

Schwarzenegger also confirmed that the mooted Triplets project, the sequel to 1986 comedy Twins, could go into production this year.

“The script will be finished in a month”, he said, confirming that he would be starring alongside Danny DeVito and Eddie Murphy, and that original producer-director Ivan Reitman is involved in the project. “It’s just around the corner,” he said.

Schwarzenegger also weighed in on the Netflix debate, which continues to dominate chatter at the festival.

“They are a terrific company and they have done an extraordinary job,” he said, “They’re visionaries and they’ve rattled the cage a bit with the studios, that’s good. New ideas and new ways of showing movies is good. For us entertainers, it’s another way you can display yourself.”

He also teased a potential collaboration with Netflix in the future, “I’m looking forward to working [with Netflix]. Hopefully there will be something.”

Donald Trump and the environment

Schwarzenegger is enjoying being in Cannes, making comments on the weather and the atmosphere of the festival. “I love being in France,” he said, adding that the French had done “a great job with the election of the president”.

As a result, he wasn’t too keen to be drawn on the subject of US president Donald Trump, with whom he has had a long-running war of words.

“I don’t make judgement on it when I’m on foreign soil,” he said, however he added that “one man cannot take us backwards” and that he thinks Trump is “misinformed”.

Schwarzenegger, who had a strong record on environmental policies as governor of California, says that the environment continues to be one of his highest priorities.

“We need to protect our oceans. Without the ocean we cannot live. This movie [Wonders Of The Sea 3D] is here to raise awareness. That’s basically what we’re trying to,” he added.