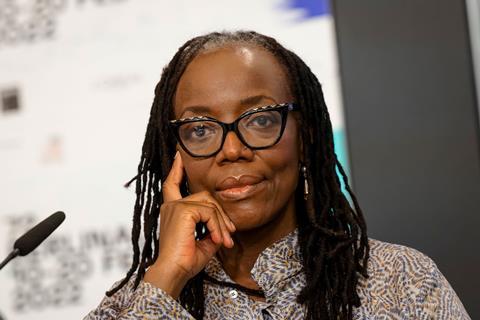 The Berlin International Film Festival has called for the exoneration of Zimbabwean writer and director Tsitsi Dangarembga, who is set to face charges of inciting violence in Harare.

Dangarembga was arrested on July 31, 2020 at a protest in the Zimbabwean capital of Harare alongside journalist Julie Barnes where they were calling for the release of journalists as well as institutional reforms.

Dangarembga was holding a poster demanding “a better Zimbabwe for everyone” but is being charged with inciting public violence, disturbing the peace and bigotry, as well as with violations of Covid regulations. The two women have since been released on bail but have also been subpoenaed 26 times. In the trial, now taking place before the Anti-Corruption Court in Harare, the decision will be made whether to drop the case or seek a verdict.

Dangarembga is an acclaimed writer and filmmaker, whose 1996 feature Everyone’s Child was the first film directed by a black Zimbabwean woman. Last year, she became the first black woman to win the Peace Prize of the German Book Trade, which has been awarded since 1950, and sat on the international jury of this year’s Berlinale.

In a joint statement, Berlinale directors Mariette Rissenbeek and Carlo Chatrian said: “As an institution that stands up for freedom of speech and freedom of artistic expression worldwide, we ask the government of Zimbabwe to clear Tsitsi Dangarembga and Julie Barnes of all charges, or to drop the case.

“Both women have consistently campaigned for freedom in courageous and artistically compelling ways. The right to free speech is anchored in Zimbabwe’s constitution, and to deny that right to these women would be unconstitutional.”