Cannes 2016: watch trailers for the films in Official Selection

Check out the trailers for films set to play at the 69th Cannes Film Festival. 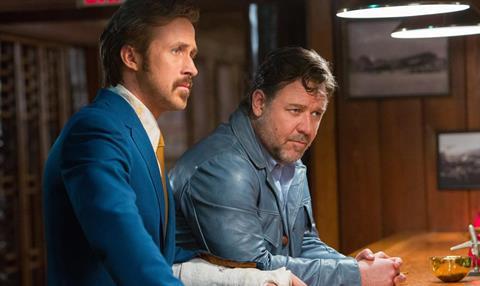 Elle Fanning leads this twisted tale of a young model who moves to Los Angeles to forge her career.

(No English trailer available as of yet)

Based on Sarah Waters’ novel Fingersmith, this Korean drama follows an heiress who falls in love with a petty thief.

Isabelle Huppert stars as the head of a video games company who, after being attacked by a home invader, sets about tracking down her assailant.

A drama revolving around a troubled family set in a small town in Romania.

A doctor attempts to uncover the identity of a patient who died after she refused her treatment.

Woody Allen returns to Cannes with this story set in the Hollywood film industry of the 1930s.

Spielberg reunites with Oscar-winner Mark Rylance for this adaptation of Roald Dahl’s classic.

George Clooney stars as the host of a financial TV show who is kidnapped by disgruntled investor Jack O’Connell. Julia Roberts plays the show’s producer.

Russell Crowe and Ryan Gosling are private eyes in this 1970s-set crime caper.

After a stranger arrives in a small village, a mysterious sickness spreads. A policeman is forced to confront the mystery to save his daugher.

The film centres on a young correctional officer who strikes up an unlikely friendship with the long-serving chief executioner of the prison in which they work.

Viggo Mortensen stars as a father who raises six children in the forests of the Pacific Northwest.

THE STUDENT - Clip from Loïc Magneron on Vimeo.

A shy Russian teenager undergoes a spiritual and religious crises when he embraces orthodox religion.