Cannes Competition pair 'Portrait Of A Lady On Fire', 'The Whistlers' land at UK's Curzon (exclusive) 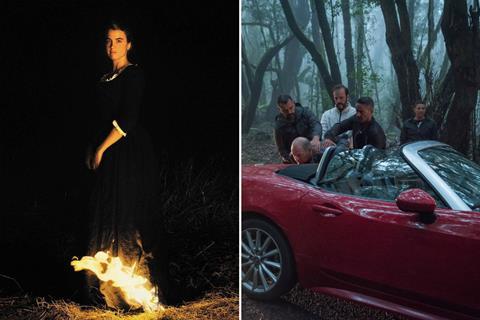 ‘Portrait Of A Lady On Fire’, ‘The Whistlers’

Ahead of their premieres in Competition at the forthcoming Cannes Film Festival, Céline Sciamma’s Portrait Of A Lady On Fire and Corneliu Porumboiu’s The Whistlers have both had their UK and Ireland rights acquired by Curzon.

The titles were picked up from Paris-based sales agent MK2.

Portrait Of A Lady On Fire is the latest feature from Girlhood director Sciamma. The latter film premiered in Cannes Directors’ Fortnight in 2014. This year she makes the step up to Competition with her period film about a painter who is commissioned to do a wedding portrait of the reluctant bride-to-be without her finding out. Observing her by day and painting her by night, an intimacy grows between the two women.

Romanian director Corneliu Porumboiu’s previous work includes the Cannes Camera d’Or winning 12:08 East Of Bucharest and more recently the 2015 Un Certain Regard selection The Treasure. In The Whistlers, a police inspector in Bucharest who plays both sides of the law embarks on a high-stakes heist with a beautiful woman.

The acquisitions continue Curzon’s recent run of buying Cannes Competition titles. Last year, the company took rights to Matteo Garrone’s Dogman and Pawel Pawlikowski’s Cold War, the latter grossing an impressive £1.2m in UK cinemas. The year before, Curzon had UK rights to seven of the films in Cannes Competition including Palme d’Or winner The Square.

As per all of its releases, Curzon will debut the new titles day-and-date in UK and Ireland cinemas with its PVoD platform Curzon Home Cinema.