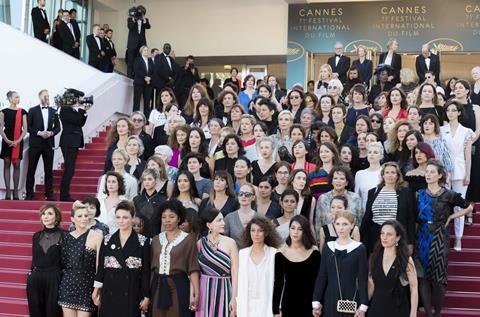 Cate Blanchett and Agnes Varda led 82 female industry figures in a silent ascent of the red carpet at the Cannes Film Festival on Saturday protesting the lack of female representation at the event over its 71 editions.

Other stars joining the protest – taking place on Cannes iconic red steps ahead of the premiere of Eva Husson’s Girls of the Sun in Competition – included Kristen Stewart, Marion Cotillard, Ava DuVernay and Lea Seydoux.

Dressed mainly in black the women ascended the steps in silence and then stood while this year’s jury president Cate Blanchett and Cannes veteran Agnes Varda read the same statement in English and French.

“We all face unique challenges but we stand on the steps today as a symbol of our determination and commitment to progress. We are writers, we are producers, we are directors, actresses, cinematographers, talent agents, editors, distributors and all of us are involved in the cinematic arts,” said Blanchett. “We stand here today in solidarity with women of all industries.”

“82 women, representing the number of female directors who have climbed these stairs since the first edition of the Cannes Film Festival since 1946,” read Blanchett

“In the same period, 1,688 male directors have climbed these very stairs. In the 71 years of this world-renowned festival, there have been only 12 female heads of its juries. The prestigious Palme d’Or has been bestowed upon 71 male directors, but only two female directors, Jane Campion, who is here in spirit, and the wonderful Agnes Varda who is here today. These facts are stark and undeniable.”

Moving, historic, 82 women from all countries and professions in cinema have just made the red carpet entrance for LES FILLES DU SOLEIL (GIRLS OF THE SUN) by Eva Husson. #Cannes2018 #Competition pic.twitter.com/0YY9SNbRqg

French cinema gender equality movement 5050x2020, which spearheaded the initiative, pre-released a list of the women taking part in the show of solidarity.