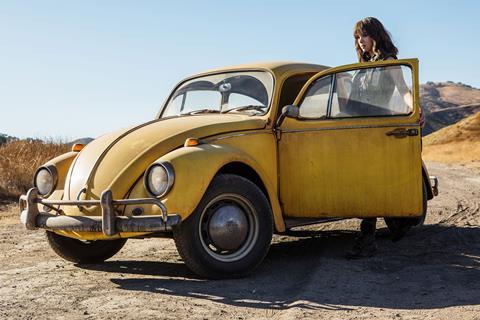 The Chinese box office remained lacklustre in the period of January 14-20, which saw a slight week-on-week decrease. While Bumblebee continued to fly high with its third week at the top and no new releases entered the top three.

Paramount’s Transformers prequel Bumblebee stayed top for three straight weeks, adding $28.9m for $134m after 17 days. It is closing the gap with Transformers: Dark Of The Moon (2011) but is highly unlikely to reach the gross of the two most recent fimls in the franchise,Transformers: The Last Knight (2017) and Transformers: Age of Extinction ( 2014). The latter is the fifth highest-grossing foreign film of all time in China.

The Big Shot, the Chinese remake of 2015 Korean crime thriller Veteran, maintained in second with $19.7m for $38.5m after 11 days. But it lost its momentum over the weekend when it was pushed to the third by White Snake on Saturday and further to the fourth by Escape Room on Sunday.

Thanks to strong buzz, local animation White Snake climbed up to second place with $17.1m for $23.5m after 10 days. As Warner Bros’ first animated project with a Chinese company, it has become the highest grossing animation for Gary Wang’s Light Chaser Animation, which previously produced Little Door Gods and Tea Pets.

As the top three places went to holdovers, Sony’s psychological thriller Escape Room became the best performing new release when it opened in fourth with $8.2m from its first three days. It is ahead of Kill Mobile, the local remake of 2016 Italian film Perfect Strangers, which took $4.2m for $89.9m after 24 days.

The rest of the weekly charts are mostly new releases: Post-apocalyptic Mortal Engines on $4m and Columbia Pictures/Bona Film Group’s family film A Dog’s Way Home on $2.8m, both from its first three days.

Local animation Boonie Bears: Blast Into The Past, scheduled for Chinese New Year, earned $2.1m based on previews only, while Japanese animation Let Me Eat Your Pancreas launched with $1.9m from its first three days.

Hollywood should continue its winning streak as Deadpool 2 is dated for Jan 25.