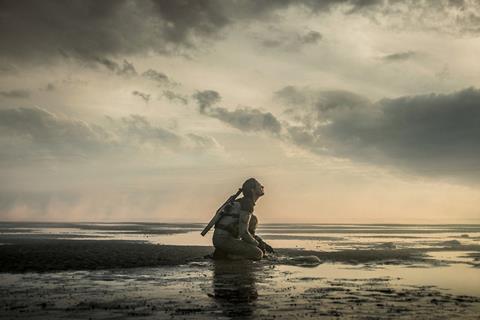 Nora Arnezeder in ‘Haven - Above Sky’

Screen can reveal a first look at the film, which is starring Nora Arnezeder (Mozart In The Jungle), Iain Glen (Game Of Thrones), Sarah-Sofie Boussnina (Mary Magdalene), Sope Dirisu (The Huntsman: Winter’s Tale), Sebastian Roché (The Man In The High Castle) and Joel Basman (Land Of Mine).

Director Fehlbaum co-wrote the screenplay with Mariko Minoguchi. Set in the near future, after a global catastrophe that has wiped out nearly all of humanity, the story follows an astronaut from space who is sent back to Earth to make a decision that will seal the fate of its people.

Sales outfit Mister Smith Entertainment is launching the project to buyers at the upcoming American Film Market in Los Angeles.

Emmerich was previously an executive producer on director Tim Fehlbaum’s 2011 feature Hell, which was produced by Wöbke and co-producer Waldburger.

Constantin Film’s Martin Moszkowicz said that the project was a “theatrical movie made for the big screen”, while Mister Smith’s David Garrett promised it would be “a cinematic spectacle”.