Discovery Networks International is focussed on diversifying the range of its content and boosting its free-to-air TV distribution, according to chief executive Mark Hollinger. 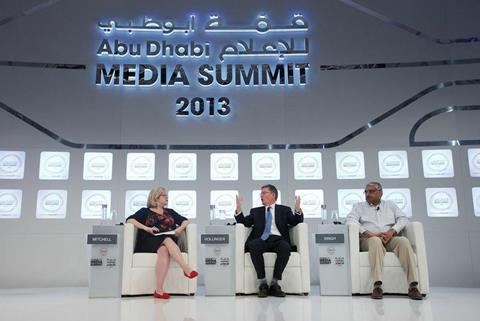 Speaking at the Abu Dhabi Media Summit, Hollinger said that moving beyond its traditional factual programing roots was vital to the future of the broadcaster.

Hollinger pointed to the recent acquisition of Middle East food channel Fatafeat, the 20% stake it bought in sports network Eurosport and the ongoing rollout of female-focussed TLC as examples of the increased breadth of Discovery’s output.

“We are now looking to be a bigger, broader media company,” he said.

Hollinger said widening the scope of its distribution strategy beyond its traditional pay TV base is also on the agenda, as the free-to-air Fatafeat also demonstrates.

The latest developments follow Discovery International’s first two phases of growth which comprised securing distribution for the main Discovery Channel before rolling out a wider portfolio of channels.

The plan to beef up its free-to-air presence is likely to see an increase in the number of Discovery shows offered online - an area in which it has been traditionally wary.

“We have the golden goose of pay TV which we don’t want to kill off, so we have been conservative about putting long-form content online,” he said.

“But in the free-to-air space we don’t have a relationship with a pay TV platform partner, so there is an opportunity for us to start to make more content available,” he said.

Hollinger acknowledged the powerhouse of its US ‘production engine’, which is responsible for around 50% of its content, but is keen to grow more shows locally which can then be distributed across its network.

“It’s all about striking the right balance,” he said. “As we start to move into producing new genres we look at everything globally. It’s perfect for us if we can get something produced locally and move it around the world.”

Hollinger also defended to resilience of linear TV in the face of increased competition from online rivals.

“The world of big TV and aggregated networks of channels will be the model for some time to come,” he said.