MAY 31 UPDATE: Alice Through The Looking Glass opens with $65m overseas from its 43 territories. 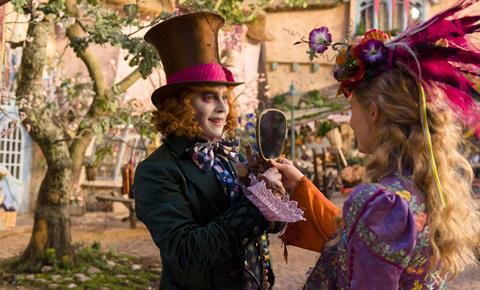 Disney is expected to pass the $4bn milestone at the global box office today [May 29].

This surpasses the previous industry record timing set last year and marking the fourth consecutive year that the studio has passed the $4bn mark.

Alice Through The Looking Glass posted an estimated $65m on its overseas debut in 43 territories, including $5.1m from IMAX screens.

China provided almost half of the weekend gross with a muscular $27.1m opening, making it the second highest Disney live action debut (non-Marvel/Star Wars) ever behind The Jungle Book.

Mexico ($5m), Russia ($4.6m), Brazil ($4.1m) and the UK ($3.2m) rounded off the top five biggest openings for the fantasy sequel this weekend. It lands in France and Hungary next weekend.

In its fifth weekend of overseas release, Captain America: Civil War fought to a further estimated $12.5m from its 56 territories for $730.7m overseas and $1.11bn worldwide.

X-Men: Apocalypse recorded an estimated $55.3m from its 79 territories in its second weekend of overseas release.

The latest X-Men outing now stands at $185.8m overseas and thanks to its three-day North American debut of $65m, Apocalypse reigns worldwide with a weekend of $120.3m.

Apocalypse landed in South Korea with a chart-topping $12m to mark Fox’s third-biggest non-holiday opening of all time, while Brazil was the best holdover as it fell only 17% for $4.8m and a local tally of $13.5m.

The film also held the top spot in the likes of the UK and Australia despite new competition. It releases in China on June 3 and Japan on Aug 8.

Fox International Productions’ The Wailing earned an extra $5.3m in South Korea to lift its running tally to $40.2m.

It is now the third-biggest Fox film of all time in the market behind Avatar and Kingsman: The Secret Service, the latter of which it’ll overtake by next week.

MAY 31 UPDATE: Flying into four new markets, The Angry Birds Movie catapulted to a confirmed $29.5m from its 87 markets for $155.3m to date.

In India, it set the new record for the biggest opening day for an animated film of all time on its way to a $1.9m debut, while it grossed $1.4m from 284 screens as it landed in Poland.

Money Monster uncovered $6.8m from its 41 markets for an early $17.1m internationally.

Germany was the best new opener with a preview-boosted $1.1m from 462 screens, while the UK and Brazil debuted with $1.2m from 400 screens and $830k from 220 screens, respectively.

It opens in Australia and Russia next weekend.

MAY 31 UPDATE: Warcraft moved into the international marketplace with a strong confirmed $31.8m bow from its 20 territories through Sunday, opening at number one in 18 of them. Through Monday the tally climbs to $34.4m.

Warcraft has 45 more territories to open over the next two months, starting with Belgium, Brazil, Italy, Netherlands, Serbia and Montenegro, Spain and the UK next weekend.

Bolstered by a $1.2m opening in Mexico, Neighbors 2 partied to a further estimated $4.5m from its 38 territories for $36.8m to date. Its next release comes in Argentina on June 16.

The Huntsman: Winter’s War landed in its final territory of Japan with $1.4m and now stands at $113.2m overseas, while The Witch scared up $1.1m from its ten territories for $12.8m to date.

MAY 31 UPDATE: Currently playing in 17 overseas territories, The Nice Guys grossed an estimated $3.7m for $6.4m to date. The film arrived at number three in Australia on $1.4m.