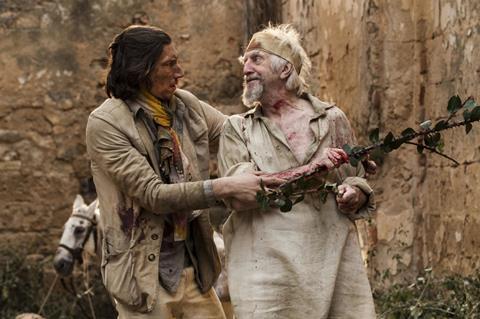 A Paris court rejected a request by Portuguese producer Paulo Branco for an injunction preventing the Cannes Film Festival from premiering Terry Gilliam’s The Man Who Killed Don Quixote at its 71st edition.

The festival will now go ahead with the screening of the long-awaited feature as its closing film on May 19.

Thierry Fremaux announced the news ahead of the Un Certain Regard opening film Donbass.

Meanwhile Branco was once again heavily critical of the festival in a press conference prior to the pronouncement of the verdict by the Paris Court of First Instance on Wednesday afternoon.

The verdict was preceded by news earlier in the day that Gilliam had fallen ill over the weekend but was now recovering at home.

He later said on Twitter: ”After days of rest and prayers to the gods I am restored and well again. So is The Man Who Killed Don Quixote! We are legally victorious! We will go to the ball, dressed as the closing film at Festival de Cannes! May 19. Thanks for all your support. #QuixoteVive”.

In a piece of more troubling news for the film, it was also confirmed on Wednesday that Amazon Studios, which helped finance the film, had dropped plans to handle US distribution on the film.

Branco launched proceedings for the injunction to prevent the Cannes premiere of The Man Who Killed Don Quixote shortly after the festival announced its inclusion in its line-up at the end of April.

The move was the latest twist in a bitter legal battle over who owns the rights to the film between Branco and Gilliam and producers at Paris-based Kinology and Madrid-based Tornasol Films on the ill-fated, long-gestated production, for which a final hearing had been set in the Paris courts for June 15.

Branco says the rights to the film belong to his Paris-based sales company Alfama Films Production.

Speaking at a press conference at the Alfama sales booth in Cannes film market ahead of the verdict, Branco revealed Amazon had dropped out of the production a month ago, after Kinology, Tornasol Films and Carisco Producciones were unable to show they had resolved the dispute with Branco.

“It was revealed today that Amazon is no longer involved in the production of the film. I would not like to be in the place of the people currently producing the film because it means they now have a €1.5m hole in the budget,” said Branco.

He revealed that Amazon’s lawyers had written to Kinology, Tornasol Films and Carisco Producciones on Feb 14 demanding clarification over the rights situation for the film, following court hearings in London and Paris which ruled in Branco’s favour.

“They gave them until April 5 to find a solution with Alfama,” said Branco. “It was very clear to them [Amazon] that the rulings in London and Paris were in Alfama’s favour, meaning that we held the irrevocable option rights for the screenplay and the director and that if a solution was not found by April 5, they would withdraw.”

Branco, who distributed copies of the letter written by Amazon’s lawyers at the press conference, said: “Amazon withdrew because the rights belong neither to Kinology or Tournasol.”

The producer also criticised the festival for programming the film, accusing delegate general Frémaux of “polluting” the atmosphere around the negotiations at a crucial moment.

“Mr Frémaux’s intervention made it impossible for the dialogue to continue,” said Branco. “What is the Cannes Film Festival? Where are we, in a territory outside of the law?

He added that we would never have accepted the closing night slot for the film, referring to as a “graveyard slot”.

“The film should have played in Competition. If you look at the last 10 years, all the films which have played as the closing film, have been a disaster when they opened,” he said. “If the film had been selected for Competition, I might have thought twice about bringing about this action.’

Branco’s bid to prevent the premiere of The Man Who Killed Don Quixote in Cannes has met with criticism from much of the wider film industry and the festival.

In a strongly worded sentence statement last week, the Cannes Film Festival condemned Branco’s lawsuit and said it stood by Gilliam on the issue.

The film’s current producers and French distributor also put out a statement last week - entitled “Why Mr. Branco never was and never will be the producer of Terry Gilliam’s Don Quixote” – laying out their case.

“He does not hold the author rights to the screenplay,” said the statement. “He did hold an option to acquire the rights from the UK company RPC but he never exercised it because he was not able to come-up with the required €250,000.”

“Branco has never paid a cent to Terry Gilliam and it’s still the case to this day. In danger of never seeing the light of day, the film was saved by its four producers: the UK’s Amy Gilliam, Spanish Mariela Besuievsky, with the support of Belgium’s Entre Chien et Loup and France’s Kinology,” it added.

Branco refuted this claim, referring to it as “fake news”, and saying he had invested some €800,000 in the production as well as created “a framework” for it to exist after a 16-year period in which was dead in the water.

Wednesday’s defeat in the courts over the Cannes premiere looks set to stoke Branco’s legal campaign.

He told journalists ahead of the verdict that he would sue both Frémaux and Cannes president Pierre Lescure personally for the damages over the further losses he had incurred by their decision to play the film, if the final verdict goes against.

The legal battle is the latest hurdle for Gilliam in his 18-year struggle to bring his interpretation of Spanish writer Miguel de Cervantes’s classic 17th-century novel to the big screen.