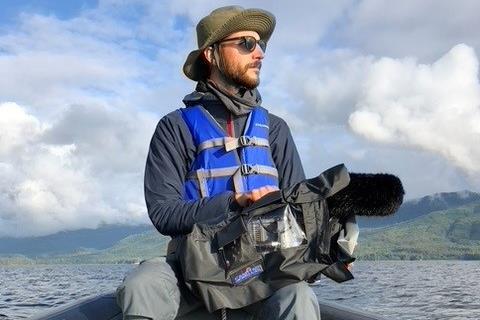 US documentary Fathom, about whale culture and communication, makes its physical and digital premiere at the Tribeca Film Festival next week ahead of its launch on Apple TV+.

The film follows marine research scientists Ellen Garland and Michelle Fournet as they embark on separate expeditions to French Polynesia and southeast Alaska to record humpback whale sounds as part of their efforts to fathom how the animals communicate.

Their work involves tracking down whales and lowering waterproof recording equipment into the water to capture the animals’ sounds. Xanthopoulos follows the ups and downs of the expeditions while delving into what drives both scientists to pursue their work.

It is Xanthopoulos’s second time at Tribeca after his documentary The Sensitives – about three families struggling with severe chemical and electrical sensitivities – played in Competition in 2017. He spoke to Screen ahead of the Tribeca world premiere.

What drew you to this subject?

I fell in love with the science. I heard a couple of radio stories about scientists trying to decipher dolphin communication. I didn’t even know that was something people were working on. I started just reading everything I could get my hands on about what was known about cetacean communication, culture, cognition and evolution. It just started painting this picture to me that was complete science fiction. I say science fiction because it’s the only genre that gives us permission to think of another consciousness as a cognitive equal.

I started connecting with scientists. And I went to an amazing conference in Nova Scotia and met a whole bunch of them there. They are among the most generous people I’ve ever met. They were just inviting me onto their boats. So it started with the science and then I ended meeting all the people who wrote these papers I was obsessing over.

Did you also study folklore and works of art and literature inspired by whales throughout history? Like Herman Melville’s Moby Dick, for example?

There is no animal on earth that captures our imagination like whales and I did look at how human cultures have perceived them across time. At one point, it was something I wanted in the film. But then we found our scientists, and I felt the film had to be in the service of their research and stories.

Why did you decide to follow these two particular scientists, Ellen Garland and Michelle Fournet?

One of the aspects of the personal stories that I was interested in was the idea of going out to sea for long periods of time, leaving everything behind – home, family, pets, and friends – to journey off to this other world to study an intelligence that you almost never see but you can hear almost all the time.

It was really important for me to find scientists who were at sea for long periods of time and really immersing themselves in qualitative research. I wanted to capture simultaneously the process of the science but also the emotionality of being out at sea and what a profound experience that is.

Once you narrow it down in that way, they’re few and far between. They’re a dying breed. It’s very hard these days for scientists to get funding to go do this kind of research. It’s much easier to get funding to do modelling. I wanted people who experience it themselves personally deeply and at great sacrifice.

One thing that is very striking is the rudimentary nature of expeditions and their equipment. At one point, the engine for Fournet’s boat breaks down and it brings the expedition to a halt.

Not to play the violin but the reality is that many research projects like these are underfunded. They all need more money. The irony is that while Michelle was out there on a 16-foot inflatable Zodiac there were these yachts in the distance, with emergency boats on the back that were three times bigger than her main boat. Resources are scarce. It makes what they were able to accomplish that much more impressive. They’re so creative and what they’re able to do with so little is magnificent.

At one point, Fournet says she is capturing the sounds to show future generations what existed. That’s quite a bleak view.

It would be irresponsible for the film to not acknowledge what is happening in an unprecedented time when a lot of different species are enormously threatened, if not on the verge of extinction. It has to be acknowledged. On the other hand, although there is a lot of outstanding work that’s taking the approach of being extremely blunt about how awful things are, for me personally that doesn’t call me to any kind of action. I prefer to take the tack of trying to influence how people see themselves and get at the core of why we do what we do. But it’s true, Michelle does make that statement, but overall the film isn’t a downer.

How did you fit into the expeditions? They’re quite small and intimate. Did you take crew or was it just you?

I work completely solo. The way I work with everybody is I will hang out with them for days and weeks without a camera. I’m asking so much of them and they have to be able to trust me. In the field, it was just me and 600 pounds of gear.

Fathom has been acquired by Apple TV+, which is great because it means the film will get a wide distribution. But the film is also visually very beautiful and has a cinematic quality that is made for the big screen, so how do you feel about the Apple deal?

From the very beginning, we felt it was absolutely paramount that people have access to watch it on large screens, as large as possible. The funders who watched a sound mix in a private screening on a big screen loved it and said they could practically feel the whales and the acoustics. It’s really hard. We want people to see it on a big screen but unless you’re like a superstar narrative director doing some comic book movie, you rarely get that much control or say over that, to be honest. For us little guy filmmakers, just knowing that your film will be able to reach potentially people anywhere is really huge. The only way to watch my last film The Sensitives, for example, is on Vimeo on Demand and I had to personally set it up.

Our perception of things was that Apple was uniquely open to the idea of theatrical despite being a streamer and the plan [Covid permitting] is for it to come out simultaneously with streaming in sites in New York and Los Angeles. The fact they were even open to theatrical was appealing to us.

One of the main producers on the documentary is Greg Boustead’s new science-focused company Sandbox Films. What role did the company play?

Sandbox Films was instrumental in this film existing. Greg and Jessica [Harrop, head of production and development] have incredible taste in art in general. They were like, “The artier, the better, do crazy things.” At the same time, they have a requirement that everything that is said in the film has to be scientifically vetted. As the director that was just such a plus that there’s somebody kind of watching my back in terms of making sure I’m not slipping up or that the scientists aren’t accidentally setting themselves up for failure in the film. They’re interested in the art and the science.

Werner Herzog is on the Sandbox Films advisory body? Did he give you advice?

Yes, I met him early on. I went to Alaska and then French Polynesia and then I came home and a week later I flew to New York to present the film. It was this incredible group of science communicators but also people from Hollywood, and Werner was there too. He was wonderful and gave all the sort of advice you would hope a filmmaker of his experience would give to a younger filmmaker. He said, “Keep doing what you’re doing, you’re on the right path. This is good.”