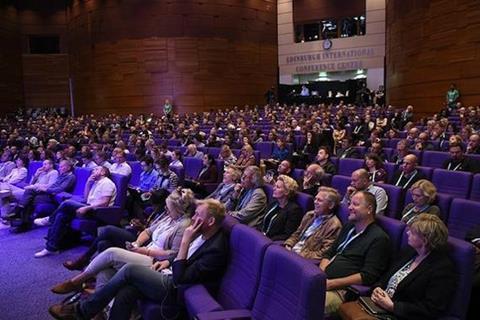 An audience at the Edinburgh TV Festival.

This year’s Edinburgh TV Festival (August 26-28) is to go online-only after organisers cancelled the physical event due to the coronavirus pandemic.

The charity that organises the festival is promising key strands of the programme, including the MacTaggart Lecture and controller sessions, will still run; while freelancers will be offered free access to the digital event.

Other staples such as talent schemes The Network, Ones to Watch and TV PhD will go ahead, while the festival’s awards event will take place later in the year.

Elsewhere, several new formats designed to reflect the specific challenges of the current situation will be added to a set of digital sessions. These will be unveiled in the coming weeks.

Festival managing director Campbell Glennie said: “Our industry is based on creative innovation and so too is the festival.

“For the past week we have been in consultation with our board, partners and supporters to re-examine not just what we could achieve this year, but more importantly what we should be doing to connect, discuss and find solutions to issues both perennial and particular to the evolving challenges we all face.”

He said the unprecedented challenges facing TV made this year’s event more critical than ever.

“Television’s vital role in our lives has never been so present, valued and cherished, and so the team will be doing everything we can in 2020 to keep discussion flowing, talent supported and diversity encouraged,” he said. “It will not be the festival we know, but it will still be the festival we love.”

BBC2 controller Patrick Holland, who is advisory chair for this year’s festival, said Edinburgh remained a “lightning rod” for the industry.

“The key themes we’ll be discussing – the future of the PSBs in the UK ecology, the role of TV in the climate emergency and reflecting the diversity of the audience in who makes and is featured in our shows – are brought into even sharper relief by the coronavirus crisis. I look forward to working with the team to bring that spirit to everyone between now and August.”

Executive chair Graham Stuart said August without an Edinburgh event was “unthinkable” and praised the team for their “resilience and imagination” in ensuring it would go ahead in a new format.

Other cultural events in the Scottish capital, including the flagship arts festival and the Edinburgh International Film Festival, have already been cancelled.