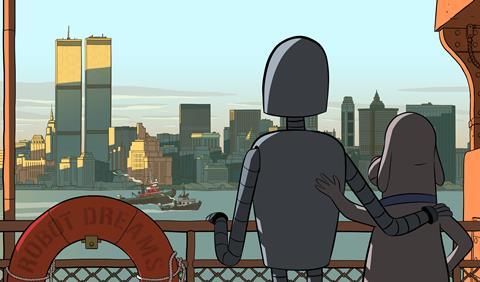 The director’s first foray into animation, it is adapted from the popular 2007 graphic novel of the same name by US artist Sara Varon, set in an imaginary 1980s New York populated by animals with no definable age or gender.

The storyline revolves around the friendship between Dog and Robot who become separated during an ill-fated day-trip to Long Island. After Robot goes for a swim he rusts up and is unable to move and Dog is forced to leave him behind on the beach.

Back in the city, Dog tries to fill the emotional gap left by the absence of his friend, while Robot awaits rescue, finding comfort in vivid dreams and happy memories of time spent with Dog.

Berger says he wants to tell “a universal story” about friendship, on its importance and its fragility that will engage spectators of all ages. The film will also be his “love letter” to New York, where he lived for a decade.

The filmmaker is currently working with art director José Luis Ágreda, whose recent credits include Buñuel In The Labyrinth, and character designer Daniel Fernandez Casas (Klaus) to develop the look and the characters of the film, which will be made in a traditional 2D animation style.

Like Blancanieves and in keeping with the book there will be no dialogue. “What interests me most in cinema is to write with images and music. I want to make a sensory experience like Blancanieves but full of colour and sound,” says Berger.

There will be a soundtrack made-up of popular 1980s pop hits. Composer Alfonso de Vilallonga, who won multiple awards for his score for Blancanieves, has also joined the project alongside sound designer Fabiola Ordoyo, who worked on Abracadraba, and editor Fernando Franco, who worked on Blancanieves

Paris-based Noodles Production and associate company Les Films du Worso, whose credits include Timbuktu and Delete History, co-produce in association with Elle Driver, which handles international sales, and Wild Bunch Distribution, which previously released animation titles like The Red Turtle and Mirai. Robot Dreams is set for release in France in around 2023.

Noodles Production has previously co-produced more than 10 films with Arcadia including Blancanieves, Julio Medem’s The Tree Of Blood and Claudia Llosa’s Aloft.