Empire Cinemas to split ‘Screen 1’ into an IMAX theatre and an additional digital screen. 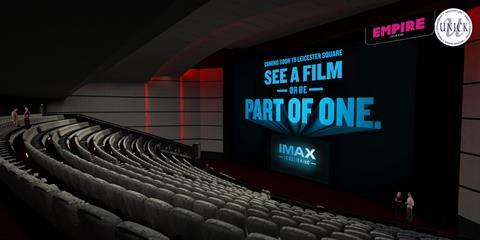 Empire Cinemas has struck its first deal with IMAX Corporation that will see the big screen format introduced to its flagship theatre on London’s Leicester Square.

It ends weeks of speculation over the future of ‘Screen 1’, the large 1,330-seater auditorium that closed without fanfare on Aug 28.

The auditorium will be converted into a 750-seater IMAX theatre and a second 400-seater screen, both of which are expected to open by the end of 2013.

The Empire will remain open during construction, with the other seven auditoria – ranging from 26 to 304 seats – continuing to operate.

Justin Ribbons, CEO of Empire Cinemas, told ScreenDaily that plans to introduce an IMAX theatre had been in the pipeline for around three years.

“We have been looking closely at the building and the possibility of introducing IMAX,” said Ribbons. “Structurally, it was initially a problem – bringing the wall forward for the IMAX screen – but that has now been solved.”

The new theatre will include digital projection, cutting edge sound technology and a significantly larger, curved screen spanning from floor-to-ceiling and wall-to-wall.

Under the terms of the agreement, the new theatre will eventually transition to IMAX’s next-generation laser digital projection system, which promises “greater brightness and clarity, a wider colour gamut and deeper blacks”.

IMAX has invested $50m in the laser technology, developed from Kodak patents, that will allow it to project brighter images on to screens of up to 100 feet from next year.

The Empire has played host to a large number of red carpet events over the years, including the recent world premiere of One Direction: This Is Us.

Asked if the new set-up would impact on the future of premieres at the Empire, Ribbons said: “Most major films are now offered in IMAX and that presents a new opportunity to premiere films in IMAX on Leicester Square.”

IMAX premieres in the capital had previously gone to the Odeon BFI IMAX, which seats 485, on the South Bank.

Andrew Cripps, president of IMAX EMEA, told ScreenDaily: “This is a huge opportunity to advance the IMAX brand.

“IMAX has theatres in some of the world’s most iconic locations are we’re delighted to partner with Empire Cinemas to add the famous Empire Leicester Square to this celebrated this.”

He added: “This agreement underscores the momentum that continues to build for IMAX in Europe.”

There are a total of 767 IMAX theatres in 54 countries, including 24 sites in the UK.

In the US, Hollywood’s Chinese theatre will reopen this month as the world’s largest IMAX-equipped auditorium.

The move marks the latest upgrade to a theatre that has stood on Leicester Square for more than a century.

The Empire first opened its doors in 1884 as a variety theatre.  In 1896, the Lumiere brothers gave the first theatrical performances of a projected film to a paying UK audience at the venue.

In the late 1920s, the Empire was acquired by Metro-Goldwyn-Mayer, who rebuilt it as a movie theatre.

Recording 12 million admissions in its first six years, its longest running film during the Second World War was Gone with the Wind, which premiered at the Empire and screened for four years.

After the war, the Empire re-launched in 1949 and closed 10 years later to install a new projection booth. It reopened in December 1959 with Ben Hur, which ran for 76 weeks.

MGM decided to remodel and refurbish the building in 1961 and architect George Coles designed the 1,330 seat, stadium-style auditorium that remained open until the end of August.

Empire Cinemas took over the site in 2005. The company owns 16 cinemas, comprising 162 screens, throughout the UK.