EXCLUSIVE: The government will invest $1m (€1m) in the project, which is projected to be the biggest facility in the Baltic region. 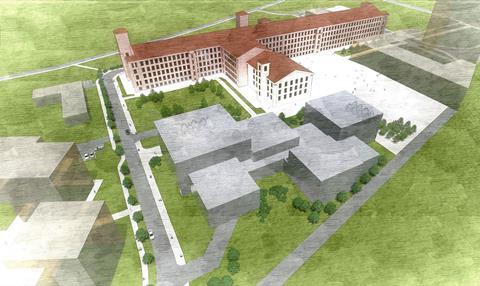 The facility was proposed earlier this year by a collective of the country’s biggest production companies.

The state has allocated a funding grant of $1m (€1m) through its business development programme Enterprise Estonia to the new studio, which will be the biggest studio complex in the Baltic region.

Speaking to Screen, Liina Maria Lepik, who was brought in as CEO of the Tallinn Film Wonderland project in July this year and has a background in the financial sector, revealed that she is also in advanced talks with an Estonian bank to raise the remaining $5.3m (€5m) investment needed to fund the project.

“We are already negotiating for the remainder of the funding,” she explained.

Lepik described the government’s funding decision as a “kick-starter to the project”, saying that plans for production of the facility “can now begin to move forward”.

A mock-up of the proposed Tallinn Film Wonderland

The 8,000-square-metre facility, which will be located at a currently unused site near the centre of Tallinn, will include one building for production offices (renovated from an old cotton factory) as well as three sound stages that can potentially be combined into one large stage with an overall size of 2,500 square metres.

Lepik says that they are aiming for the facility to be open by the end of 2018.

The new studio complex will be targeting both local and international productions, including films, television and commercials, potentially increasing the attractiveness of the territory following the introduction of the new tax rebate system earlier this year.

“The cash rebate has been a major thing, and Estonian film-makers have recently attracted a lot of attention, but the local industry is struggling with a lack of facilities,” commented Lepik, who reported that she has already received strong interest from Scandinavian producers to use the facility when it opens.

The six productions outfits that have instigated the project are: Allfilm, producers of Oscar-nominated Tangerines; Kinosaurus, the company behind The Days That Confused, which plays in Black Nights’ Estonian features competition this year; Filmivabrik, whose feature Family Lies also plays in the festival’s Estonian competition; Taska Productions, whose credits include 2002 war drama Names Engraved In Marble; Nafta Films, producers of family adventure The Secret Society Of Souptown;, and production services and advertising company Stellar Film.

Also supporting the project are a further 17 Estonian film companies united under the Estonian Industry Cluster banner, which is headed up by The Wish Tree producer Karin Reinberg-Šestakov.

Katre Purga, who is responsible for the creative funds distributed by Enterprise Estonia, commented: “We are really glad that the production companies have come toegther and applied as a team, and on top of that chose someone with financial experience to represent them. The project was granted €1m without any reductions.”

She added that Enterprise Estonia has “€20m to be allocated to the creative sector between 2014-2020”.

Black Nights chief Tiina Lokk commented on the news: “We are happy to see this qualitative leap in the Estonian film industry taking place and will support the endeavour in any way we can. It is sure to raise the level of film-making and everything related - distribution, marketing etc. - to a new high and will hopefully help us to put the local industry more on the global map.”