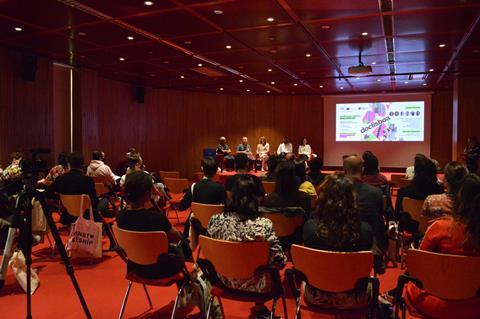 Doclisboa’s State of the Art conference 2021

Showing films in “non-traditional” venues was one strategy debated by experts at the ‘alternative circulation strategies’ panel, held last weekend as part of Doclisboa’s State of the Art conference.

The festival is running as a physical event from October 21 to 31.

Czech-based Ivana Formanová, manager of alternative documentary distribution project KineDok, spoke about her organisation’s efforts to get documentaries to new audiences in the Czech Republic, Slovakia, Hungary, Romania and Croatia.

“Our venues can be community centres, charity shops, galleries or pubs. The crucial part of the project is to communicate with the venue manager… about what the community for whom they want to screen the film is looking for.”

KineDok comes up tailor-made marketing strategies for the different venues. This can mean providing expert guest speakers or making the filmmakers available for the screenings.

“Right now, we are showing an exhibition of Mohamed Bourouissa, who is a French-Algerian contemporary artist. He has a film practice too,” she noted. “He knows a lot of young filmmakers. He will create a film programme and will then invite all these young filmmakers up [to the exhibition].”

Filmmaker Ivan Perić is on the board of Kino Klub Split (Croatia), a non-profit organisation which has set up in the early 1950s. It not only shows films but runs theoretical and practical workshops and provides equipment and facilities for young filmmakers.

“One of the main goals is to make people do their own work, author-driven films, not classical film but more documentary and experimental cinema,” he said.

The Kino Klub is based in a youth club in the centre of Split and contains its own screening theatre. “We show films from the Klub’s rich history but also from other filmmakers [involved in] this alternative cinema from Europe and all around the world.”

The Klub produces its own films but also coproduces with the Arts Academy in Split as well as with other partners. “The main goal is to encourage people to make their own films which are more like art films.” The organisation has close links with both the Croatian Film Association and with other cinema clubs across the country.

Chema González from the National Museum Reina Sofia Art Centre (Spain) spoke of their recent online homage to veteran French filmmaker Sarah Maldoror, who had been the subject of an earlier tribute at the venue but who died last year at the start of the pandemic.

“It was beautiful because we had an international audience,” González said of the viewers worldwide who were able to watch some of Maldoror’s best known films. “It was amazing in terms of the number of views and the International impact.”

Other speakers at the event included Nuno Rodrigues from Solar – Cinematic Art Gallery (Portugal), which has curated many exhibitions of short films, and Anže Peršin from Stenar Projects, a Portuguese production platform for artists’ films.

The conference is staged in collaboration with the Creative Europe Desks MEDIA from Portugal and the participation of the MEDIA desk from Croatia and the Czech Republic.