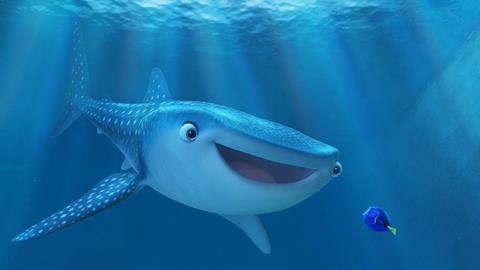 To go with its record-breaking North American bow, Finding Dory swum to an estimated $50m on its international debut in 29 territories.

Argentina posted the second biggest Disney/Pixar opening with $3.5m, behind only Monsters University, despite Argentina’s Copa America football match on Saturday [June 18], while Russia and Colombia opened with $3.4m and $2.1m, respectively.

In its fourth weekend of overseas release, Alice Through The Looking Glass sailed to an estimated $8m from its 45 territories for $166.7m to date.

China remains the top market with $57.9m to date, while the fantasy sequel opened top in Hong Kong with $930k. It opens in Japan on July 1 and South Korea on Sept 8.

UPDATE: The Conjuring 2 has crossed the $100m mark at the international box office.

Mexico is currently the leading overseas market with $15.8m, followed by India with $9.4m and South Korea with $8.7m. It creeps into Italy on June 23 and France on June 29.

The adaptation opens in Germany next weekend.

UPDATE: Following its record-breaking China bow last week, Warcraft marched to an additional $41.54m from its 57 territories for $340.5m overseas.

Legendary and Universal Pictures’ adaptation has hit the $200m mark in China, where it is being distributed by Dalian Wanda-owned Legendary, as it stayed top with $23.54m for $205m.

In its Universal territories, Australia opened $2.5m to chart second, Mexico also landed second with $3.4m, while South Korea was the top holdover with a $1.7m second weekend for an 11-day total of $7.9m.

Warcraft is now IMAX’s third best-grossing Hollywood title in China with a terrific $27.5m after just 12 days in play, more than half of its global IMAX running total of $44m.

Central Intelligence still has 38 more territories to open over the next three months, starting with Cyprus, Estonia, Peru and South Africa next weekend.

Neighbors 2 and The Witch stand at $44.3m and $14.7m, respectively, at the international box office.

UPDATE: Ahead of its release in China next Friday [June 24], Summit Entertainment’s Now You See Me 2 conjured up $16m from its 54 markets for an early $49.7m overseas.

The Middle East and Malaysia debuted with $900k and $1.2m, respectively, while Russia remains the sequel’s top market with $11.9m after two weeks in play. Australia has grossed $5.5m after three weeks, while Taiwan has provided $4.4m after two.

UPDATE: X-Men: Apocalypse has become the biggest X-Men outing of all time in China with a local currency running total of RMB 732m.

Opening in six new markets, Teenage Mutant Ninja Turtles: Out Of The Shadows sliced to a further $10.5m from its 50 markets for $70.8m to date.

Flying into Italy with a chart-topping $1.6m, The Angry Birds Movie catapulted to an estimated $6.3m from its 88 markets for $224.5m to date overseas.

Money Monster uncovered an estimated $3.5m from its 82 markets for $42m so far internationally.

Proof Of Innocence opened to an estimated $3.75m in South Korea, according to ComScore.

Currently playing in 25 territories, The Nice Guys added an estimated $2.5m for $21m to date overseas, according to ComScore.