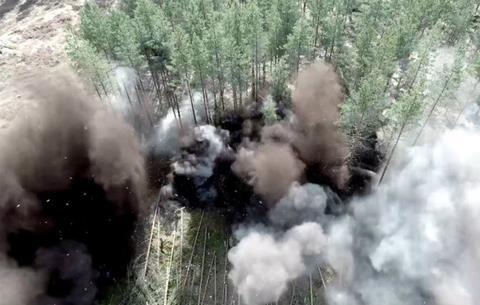 Finnish war epic Unknown Soldier has taken more than $14m at the local box office, making it the biggest film ever in the territory since modern records began in the 1970s. In the same period, the 830,000 admissions for the movie are second only to Titanic. The film also drew 20,000 people to its Swedish debut last weekend, also a record for a Finnish film.

Box office records aren’t the only milestones the film is crossing.

Aku Louhimies’ historical epic, which cost around €7m, has also smashed the Guinness World Record for the most high-explosives detonated in a film take.

In one shot, the team used 64.8kg of high explosives with a TNT equivalent of 70.5kg.

Guinness World Records attempt for Most high explosives detonated in a single film take from Duncan Capp on Vimeo.

The June 2016 simulation of an artillery bombardment of a Russian bunker included eleven ground explosions and fifteen tree explosions. The explosions were carried out on a military base in an area where trees were due to be culled for construction purposes.

Unknown Soldier’s special effects supervisor Duncan Capp, whose credits also include Batman Begins and Troy, told Screen: “At first we didn’t know we had set a record. It was a wide shot and we just used the amount of explosives needed in order to cover the shot. We knew we had used a lot, but it wasn’t until we finished shooting and talked about it that we realised we had used a massive amount compared to the previous record.

“Most war films use a lot of kerosene to create fireballs [as was the case with the Spectre stunt] which look very big. The amount of actual explosive needed for a fireball is relatively small. Also, a lot of films use different cuts to allow time to setup, shoot and move cameras etc. Aku [director Aku Louhimies] wanted these explosions to be shot in one take using eight cameras.”

Adapted from one of Finland’s most popular books, Unknown Soldier is the story of an infantry unit’s tour of duty that lasts for more than three years during the second world war. Louhimies is currently overseeing the adaptation of the film material into a ‘5x50’ TV series, which will also be handled by Beta Cinema.