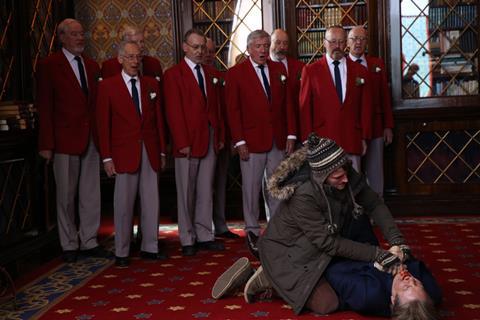 The film, about an attempted assassination of a controversial secularist at a literary festival, stars Roger Allam (The Lady In The Van) Derek Jacobi (Tolkien) and Anna Maxwell-Martin (Philomena), alongside Harry Melling (The Lost City Of Z) and Tom Brooke (The Death Of Stalin). Vinette Robinson and Flora Spencer-Longhurst also star.

Michell (Chubby Funny) directed from a script he co-wrote with Jamie Fraser. Helen Simmons produced. The film is now in post-production after shooting in Yorkshire, UK.

The film is a Guinea Pig Production with Aimimage Production in association with Independent and Featuristic Films. Financing came from Screen Yorkshire, Ivy Gate Films, and Umedia.

Independent showed buyers footage in Cannes this week. The film was also part of the Great Eight showcase of UK movies.

Independents’ head of sales Sarah Lebutsch commented: ‘With Chubby Funny, Harry has proven that he has a rare talent for shooting comedy. Now this talent has been combined with the hilarious Ikley script (written by Harry and Jamie Fraser) and the fantastic cast, we look forward to presenting a truly original film to audiences world wide.”