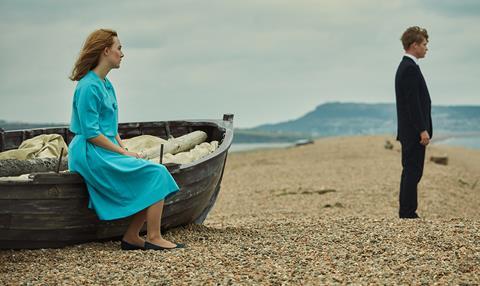 Screen can reveal the first image of Oscar-nominee Saoirse Ronan and 2015 Screen Star Of Tomorrow Billy Howle (Sense Of An Ending) in anticipated drama On Chesil Beach.

The 1960’s-set story charts how a blissful honeymoon is ruined by a misunderstanding between nervous virgin newlyweds.

Currently in post-production, Dominic Cooke’s (The Hollow Crown) feature debut is adapted by Ian McEwan from his 2007 Booker Prize-shortlisted novel.

Elizabeth Karlsen and Stephen Woolley of Number 9 Films produce. Lionsgate will release in the UK.

DoP is Sean Bobbitt, known for his work on 12 Years A Slave, Hunger and Shame.

Backing comes from BBC Films, which also developed the film, the Fyzz Facility and Lipsync Post with soundtrack services from Universal Music.