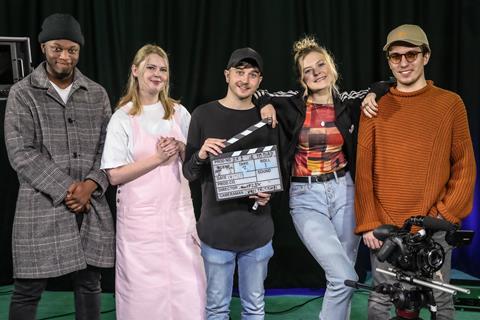 Five aspiring UK filmmakers will receive a production award of £10,000 each after being selected for Creative England’s Shortflix initative.

They will each will make a short which will be broadcast on Sky Arts in 2020.

The initiative, run in partnership with Sky Arts and Screenskills, was open to filmmakers aged 18-25 who are not in employment, education or training, with “a focus on underrepresented voices”. The programme is supported by the ScreenSkills Film Skills Fund with contributions from UK film productions.

The final five were selected following an initial development process involving 26 filmmakers, with more than 300 applications to the scheme this year.

Left Behind (Wakefield)
Dir: Carrie Battram
A tender short about 15-year-old Johnny who, after the death of his mum, finds connection and hope through the things she left behind.

Offended (Cheshire)
Dir: Danny Seymour
The story of a middle-aged man who embarks on his first ‘date’ for years in a near-future where people express their reactions in a very surprising way.

If I Die Today (London)
Dir: John Akinde
The story of David who is caught between friendship, revenge and doing the right thing when he I swept up in neighbourhood gang warfare.

Seven Sisters (London)
Dir: Isabella Culver
A tale of modern-day witchcraft where protagonist Juliet seeks out an unusual form of therapy for the PTSD she is experiencing.